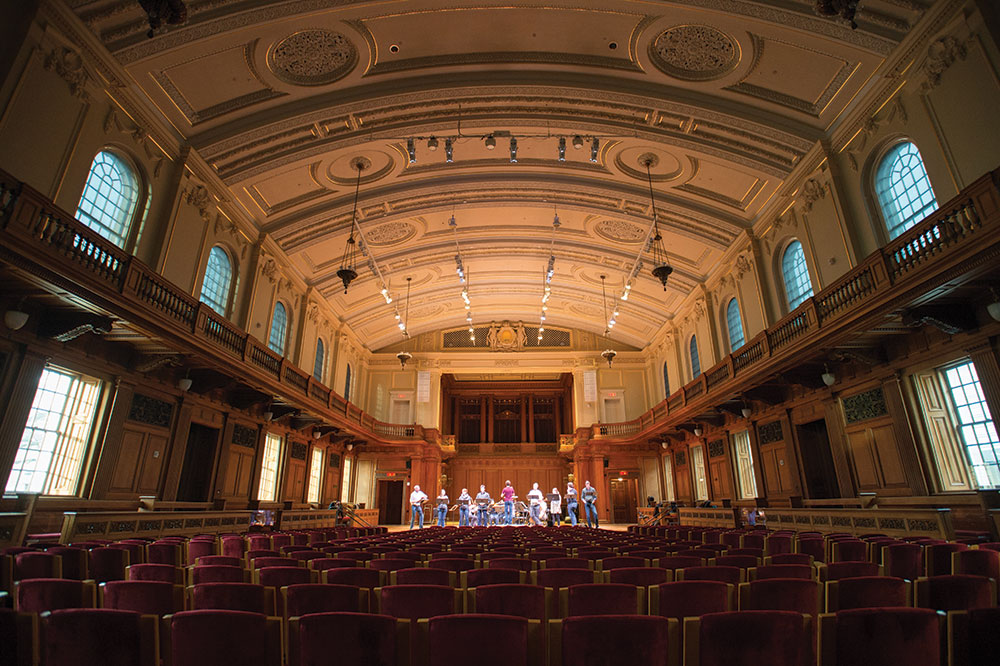 Derek Galvin ’18 stands on Chapin Hall’s stage in his stocking feet, furiously conducting an arrangement of Mozart’s The Marriage of Figaro. The singers’ voices fill the newly renovated space, but Galvin’s trained ear detects a gap in the vocals. He abruptly stops the performance.

Keith Kibler, co-director of the Williams Opera Workshop, who’s singing the role of Count Almaviva, quickly apologizes: “I’m always leaving a space there, and there’s no space there.” The singers flip back a few pages in their songbooks and take it from the top.

The workshop participants, all but two of them students, are preparing for a Jan. 26 performance that includes selections from Figaro, Engelbert Humperdinck’s Hansel and Gretel and Kurt Weill’s Street Scene. Ten singers, three pianists, two conductors and an orchestra of 20 rehearse nearly every day during January.

Now in its second year, the workshop gives students an opportunity to see how a performance is shaped and refined alongside seasoned professionals. Though it’s not a formal course, some students are music majors, and many are preparing for careers in music or theater after graduation.

“Experiences like [the workshop] have shown me this is something I really want to do,” says Daniel Potter ’16, a math and music double major who is seriously considering becoming a professional conductor. “I want to bring the joy that I feel in singing to other people, especially young people.”

Most of the students in the workshop take voice lessons with Kibler and co-director Erin Nafziger. Though the two vocal coaches are professional opera singers themselves, they enjoy the chance to expand their own repertoires. For Hansel and Gretel, Nafziger says, “We’re learning it measure by measure with the students.”

They’re also re-learning how to navigate Chapin Hall, which received a $5.5 million facelift in the fall. Renovations include an extended stage, which improves the way performers interact with each other and brings them closer to the audience.

“The difference is huge,” Nafziger says. “At times, it sounds like people are singing right next to you when they’re a few feet away.” Additional updates, including a new acoustical canopy, are planned for this summer.

Staging for the workshop’s performance is minimal, and there will be no costumes. The emphasis is on the music. Deep into a two-hour rehearsal, the performers’ focus is unwavering. Every sound—the flutter of turning pages, the scrape of a violinist adjusting her chair—can be heard easily from the back row of the concert hall.

Kibler quips “not bad” after a successful run-through of Figaro. But there’s still work to be done. Not that any one minds; they’ve all made a commitment to something they love. Harold Theurer ’17, a political science and theater major who intends to pursue acting after graduation, sums it up: “Any opportunities to sing, I’m very grateful for.”
—Francesca Shanks