“The words most associated with Anne … are ‘dignity’ and ‘grace.’ Not a bad way to be remembered.” —President Adam Falk in a letter to the campus community about the passing of Anne Sawyer on Feb. 16. She was 97. 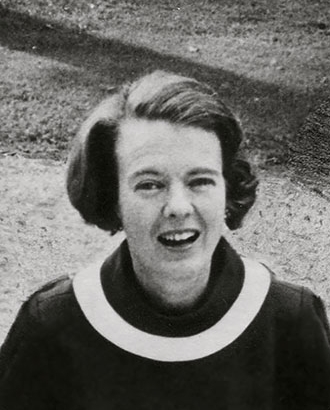 Anne Sawyer came to Williams in 1961, when her husband, Jack Sawyer ’39, was named president of the college. Within a year, they became central figures in the process that led to the end of fraternities at the college. And, as Falk wrote, “The president’s wife found herself, shy by nature, thrust into the role of hosting countless high-stakes and potentially stormy gatherings.”

To thank her for her many contributions to Williams, the college in 1984 created the Ephraim Williams Medal, given “occasionally to a non-alumnus who has demonstrated exceptional service and loyalty.”

She is survived by four children, nine grand-children, including Rob Sawyer ’03, and five great-grandchildren.