Sociology professor Olga Shevchenko has been visiting with Russian families and studying their old photo albums, searching for clues about the Soviet past and knitting together a narrative about memory and silence.

Shevchenko became interested in photographs and memory while working on her book Crisis and the Everyday in Postsocialist Moscow (Indiana University Press, 2008). While conducting interviews for the book, she was often invited to look at old pictures. “I realized that photographs both authenticated memories and, sometimes, ran counter to them,” she says.

She began investigating family photo collections with Oksana Sarkisova, a researcher at the Open Society Archives at Central European University in Budapest and a friend from their undergraduate years at Moscow State University. For each collection, the researchers interviewed the owner and his or her children and grandchildren, for a total of 53 families living throughout Russia.

“We see different permutations of silence between the generations,” says Shevchenko. “ The older generation knows things but won’t speak about them, whereas the younger generation are oftentimes unaware of why, for example, their grandparents might remove a face from a photograph.”

Shevchenko and Sarkisova came across albums with pictures that were torn in half. Others contained photos with faces ripped or scribbled out. The owner of an image taken at a health resort in Crimea in the 1930s (pictured on the facing page) passed away. “Her great-nieces look at this photograph without a trace of suspicion,” Shevchenko says. “To them, the album is a record of their great-aunt’s exciting travels to regions that are now financially and logistically out of reach.” 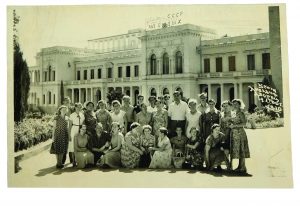 Olga Shevchenko found this photo at a flea market in 1960. The picture was taken at Livadia Palace in Crimea. The 19th-century palace was turned into a health resort for Soviet workers in 1925 and, 20 years later, was home to the Yalta Conference.

Shevchenko can’t know for sure why that particular face was removed, but her research suggests it may have to do with Stalin’s power. “Every arrest of an enemy of the people triggered the removal of that person’s image from photographs owned by others,” she says. “Because her great-nieces don’t suspect anything sinister when they look at this image, we can only assume the owner didn’t share her reasons for scratching out that face. What she did share with her family was her life philosophy: ‘Whenever you see or hear anything, just keep quiet.’”

Group photographs such as these are likely to appear in dozens of family albums around Russia, nestled between baby pictures and family portraits. “These trips were subsidized by workplaces, and so the shots are of near strangers posed to look like friends,” Shevchenko says. “One would meet people from other regions who worked in the same industry, and each brought home a group shot as a record of their experience.”

The depiction of architectural landmarks in the Baltic states, the Caucasus, and Crimea is also common. In a 1960s photo taken in Crimea (above), the group is posed in front of Livadia Palace, where the Yalta Conference took place in 1945. Pictures of such landmarks “tied together disparate locations and contributed to the idea of a united Soviet space,” Shevchenko says. “In their small way, these pictures contribute to the logic in which the recent annexation of Crimea was couched, that ‘Crimea was always part of Russia.’

“Photographs enable a kind of half-life of silence,” Shevchenko adds. “They conjure visions of the past and, sometimes, prevent people from knowing something definitively. Nonetheless, the sense that the past is a source of danger, not of pride, is passed along to the next generation.”