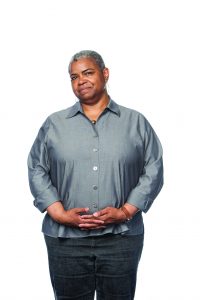 The Williams community came together in September to celebrate the life of Professor of History Leslie Brown, who died Aug. 5 after battling cancer.

A widely respected scholar of American history, Brown joined the Williams faculty in 2008. Colleagues, students, and alumni described her as a careful observer and cautious listener who demanded accountability in others even
as she supported and nurtured them.

“She was a warrior,” Tayana Fincher ’17 told the crowd gathered at the ’62 Center for Theatre and Dance’s MainStage to honor Brown with eulogies, song, and dance. “She confronted us with the unbounded truth.”

Don Polite ’13, a doctoral student in history at the University of South Carolina, said of his former professor, “To know that someone so brilliant,
so warm, and so wise believed in me was
more than I could ever ask for.”

She was the author of Upbuilding Black Durham: Gender, Class, and Black Community Development in the Jim Crow South (2008), which won the Organization of American Historians’ Frederick Jackson Turner Award. Brown also published African American Voices: A Documentary Reader from Emancipation to the Present (2014), and, with her partner, Annie Valk, associate director for public humanities and a lecturer in history at Williams, she co-edited Living With Jim Crow: African American Women and Memories of the Segregated South (2010), which won the 2011 Oral History Association Book Award.