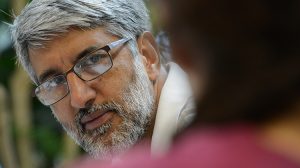 Protik “Tiku” Majumder, professor of physics and director of the Williams Science Center, has been named the 2017 winner of the American Physical Society (APS) Prize for a Faculty Member for Research at an Undergraduate Institution.

The prize honors a physicist whose research in an undergraduate setting has achieved wide recognition and contributed significantly to the professional development of physics students.

In his laboratory, Majumder and his students pursue precise measurements of atomic structure in Group IIIA atoms. His lab has produced two student winners of the APS’s LeRoy Apker Award, the nation’s top prize for undergraduate research in physics.

Majumder joined the faculty in 1994 and has taught courses including Quantum Physics; Sound, Light, and Perception; and Electricity and Magnetism. He is the third Williams physics professor to win the prize, joining Stuart Crampton in 1989 and William Wootters in 2007.