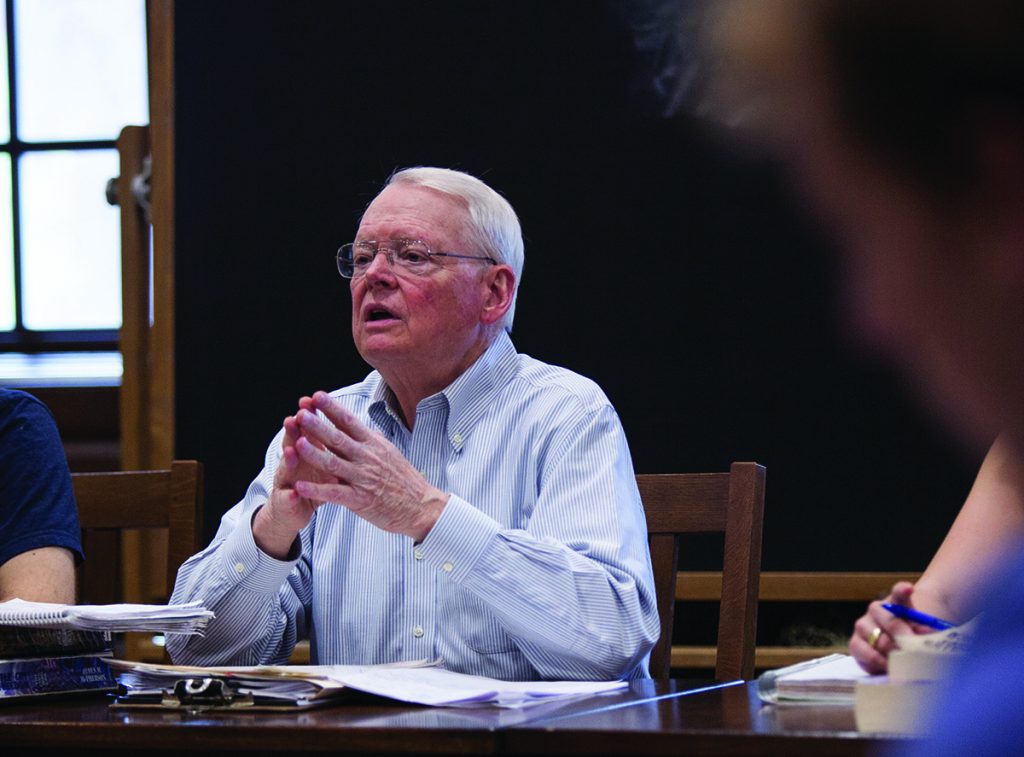 The Un-Making of a Racist

In his compelling new memoir, Professor Charles Dew ’58, one of America’s most respected scholars on the history of slavery, shares the story of his childhood growing up white in the Jim Crow South and how his consciousness— and conscience—were raised at Williams.

“How did someone as white as you come to study our history?” The question, Charles Dew ’58 recalls, “rocked me back on my heels.”

It was 1994, and the question was asked by an African- American man at a conference for public school teachers in Tidewater, Va. Dew, a beloved Williams professor and noted scholar of the Civil War and Reconstruction eras, had just given a talk about industrial slavery and opened the door to questions.

Dew began to answer him, explaining how research for his dissertation on the Tredegar Iron Works during the Civil War led to an interest in enslaved ironworkers and, ultimately, his first two books.

“And then I stopped dead,” Dew writes, recounting the experience in his memoir e Making of a Racist: A Southerner Reflects on Family, History, and the Slave Trade, published in August by the University of Virginia Press. “I knew this was not what this teacher wanted to know. I paused again, but this time actually to think.

“To tell you the truth, I never really sat down and thought about this before. I just went after what fascinated me as a historian. But I think I started studying the South and race and slavery because I wanted to know how white southerners—my people—had managed to look evil in the face every day and not see what was right there in front of them, in front of us. I grew up in the Jim Crow South. Segregation was all around me. I never saw it.”

Dew’s “awakening” to racial injustice occurred at Williams, where for the first time he lived and learned alongside black classmates and slowly began “thinking about my part of the country in ways that had never occurred to me before, critically, analytically, with a mounting need to know and understand.” As a Williams student, he writes, he underwent a process of “consciousness raising and conscience raising.”

Now, as the college’s Ephraim Williams Professor of American History, with more than 50 years of teaching southern history, he’s shared with countless students his memories of growing up on the white side of the color line. “My students remember these stories,” he writes. “ They invariably ask probing questions in class and often stop by my office to continue our discussions.

“So,” Dew continues, “I decided to write it down.”

Dew was born in 1937 in St. Petersburg, Fla. His ancestors participated in slavery and fought for the Confederacy; his parents embraced racial segregation. On his 14th birthday, he writes, “My sense of history came fully into focus … when my father presented me with twin gifts that marked my coming of age as a white son of the South: a Marlin .22-caliber bolt-action rifle and Douglas Southall Freeman’s massive three-volume history of the Army of Northern Virginia, Lee’s Lieutenants: A Study in Command.” at year he also received a copy of Facts the Historians Leave Out: A Youth’s Confederate Primer as a gift from one of his father’s law partners, who, Dew writes, “felt it was important for a southern boy to grow up on the right side of history.”

Looking back on his childhood, Dew writes, “I realize now that many of the Jim Crow customs I learned growing up I absorbed more through a process of osmosis than through verbal instruction.” He describes knowing without ever being told that the two jelly glasses and two sets of chipped china in a corner of the family’s kitchen cupboard were for Ed, the black man who mowed the Dew family’s lawn, and Illinois, the black woman who did their housekeeping.

“I learned never to shake hands with an African- American person. Pop never did … so I never did,” Dew writes. “I addressed African-American men and women who worked for us by their first names. I did not use their last names prefaced by Mr. or Mrs. or Miss because my parents never did.”

He adds, “the same racial etiquette that brought Illinois to the back door of our house did not permit my mother to walk through the front door of hers.”

His father believed strongly in the value of education, and, Dew writes, “On several occasions, his travels on behalf of clients had taken him to New York City. ere, a disproportionate number of the men who impressed him the most, who both spoke well and wrote well, had gone to Williams. Pop had never heard of the place, but … he liked what he saw.”

After attending Woodberry Forest, an all-boy’s independent school in Virginia, Dew followed his older brother, John, Class of ’56, to Williams. Their father apparently had no qualms about sending the young men north for the first time in their lives. “I think he considered the southern armor in which we were clad to be impenetrable,” Dew writes. “We would get a first-rate liberal arts education; we would learn to speak well and write well. But we would be impervious to change in ways that really mattered: Our ideas on things like politics and race would remain grounded in the soil of the South.”

For a while, that proved to be the case. “the scales did not fall from my eyes the moment I stepped onto the Williams campus,” Dew writes. He cringes at the memory of visiting a white classmate’s room a few days after the fall semester began and reciting a racist joke “in a Negro (as we said then, if we were being polite) dialect” at the very moment their entry-mate Ted Wynne ’58, who was black, walked by the open door.

Embarrassed, Dew later sought out Wynne. Though neither mentioned the incident, Dew writes, “I realized as I walked away that something remarkable had happened. I had never carried on anything approaching a real conversation with an African-American individual that approached … an exchange between equals.”

Dew’s love of history was ignited, in part, by a “life- changing” seminar on the history of the Old South taught by Robert C.L. Scott. “We studied slavery, antebellum politics, rising sectional tension, secession and the Confederacy—all with the gloves off. … Professor Scott … did not preach to me or to any of us in the seminar. He did not have to. e materials we were reading spoke for themselves. “Halfway through the seminar,” Dew writes, “I wanted to be a historian.”

After completing his Ph.D. at the Johns Hopkins University, Dew returned to Williams as a visiting professor of history for the 1977-78 academic year. He has been a member of the faculty ever since.

A “scholarly thunderclap” occurred the day Bob Volz, then custodian of the Chapin Library of rare books, invited Dew to see a new acquisition. It was a broadside dated Aug. 2, 1860, stamped with the seal of Betts & Gregory, Auctioneers, Franklin Street, Richmond, Va. On the left-hand side of the page was a list of categories of slaves: “Extra,” people of exceptional height, musculature, and physical attractiveness or with special skills; “No. 1,” men at their full physical development or women at the peak of their childbearing years; and “Second- rate or Ordinary,” possessing a “defect” like the mark of a whip, or with bad health or attitude. Next to each category were that week’s market prices, written by hand.

Today, the market report is the first thing Dew shows students in his Old South and American Civil War classes. “their reaction is often one of puzzlement followed by stunned disbelief, as well it should be at the onset of the 21st century,” Dew writes. “But then the rami cations of what they are looking at begin to sink in. It is a profoundly educational document.”

Toward the end of the semester, he asks his students to examine two more documents. The first is a letter to Thomas Jefferson’s executor from P.H. Leuba, who purchased a 14-year-old enslaved girl from the late president’s estate. The girl, Jeanette, arrived at Leuba’s home badly burned after a run-in with the overseer at Jefferson’s Poplar Forest, and Leuba sought a reduction in her price now that she was “damaged.”

The second document is a rare one—a letter written by Eavans McCrery, an enslaved man in Kentucky, to Elizabeth McCrery of Roanoke, Va., who inherited him from his late master. In it Eavans implores his mistress to sell him to a potential buyer in Kentucky so that he may remain close to his wife and child.

Dew asks his students to analyze the two letters line by line and answer a question: “Would antebellum white southerners experience guilt over slavery after reading what is written here? Or did they find ways to look at the consequences of slavery in the face on a daily basis and experience no guilt over the South’s ‘peculiar institution’?”
e class discussion the day the students turn in their papers is one of the best of the semester, Dew writes, with the students evenly split on whether antebellum southerners felt guilt. Dew thinks they didn’t.

“Once notions of white supremacy and black inferiority are in place in the American South, they are passed on from one generation to the next with all the certainty and inevitability of a genetic trait,” he writes.
“It is a sordid tale,” he adds, “all of this, spanning centuries and generations, but we are not doomed by it. We can do better, we have done better. But we must do better still. We have to shuck o the last vestiges of that reptilian skin of racism, even if we do not think we are still carrying it around. Because we are.”

Dew recalls how he intensified his own efforts to “shuck off” that skin while home for the summer before his senior year at Williams. He’d begun driving the family’s housekeeper, Illinois, home after work so that they could “really talk” to each other. One day during the 25-minute ride to the south side of St. Petersburg, she asked him a question he’s never forgotten: “Charles, why do the grown-ups put so much hate in the children?”

Dew closes his memoir with that question in mind: “We should strive to be, and we should become, the generation of ‘grown-ups’ who finally, at long last, refuses to put ‘the hate in the children.’”

Charles Dew is the college’s Ephraim Williams Professor of American History. His memoir The Making of a Racist: A Southerner Reflects on Family, History, and the Slave Trade (University of Virginia Press, 2016) is dedicated to Illinois Browning Culver.