I read with great interest your coverage of the watch drop from the chapel tower (inside front cover, summer 2016).

I was Class of 1955, and my father, Edward L. Reed, Class of 1916, told me while I was there that he initiated that tradition by tossing an Ingersoll pocket watch, which men then carried on a chain across their chest. It was apparently hard to break them. I have two granddaughters who recently graduated from Williams—Kelsey Leonard ’15 and Molly Leonard ’16, on the 100th anniversary of her great-grandfather’s graduation. Incidentally, my daughter Story Reed Leonard is Class of 1984. That is a nice line of the Reed family at Williams.
—Alan L. Reed ’55, Villanova, PA. 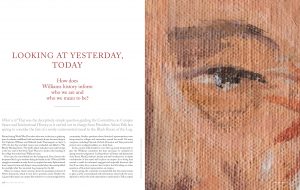 What a superb issue, focused on the mural at the Log (“Looking at Yesterday, Today,” summer 2016). Speaking truth to the power of embedded tradition is always tough, and that is what the honest historian is constantly up against. The thought of our Eph as “having a slave or two” was a new insight to deal with. By the way, Chief Hendrick was very tall. His femur was preserved by his tribe, and sculptor Jud Hartmann, who specializes in heroic statues of Native American warriors, told me that doctors looking at the length of his femur estimate that Hendrick was 6 feet 4 inches tall. By all means keep up your investigative journalism into the past.
—Don Gregg ’51, Armonk, N.Y

Your article on the painting in the Log, and the thoughtful way the college has dealt with the issues surrounding it, was very welcome. The discussion was insightful. It tells a lot about what’s on the minds of Americans today. I think the college handled the situation just right. However, none of the commentators about the painting talked about what was in fact its focus—two regional military commanders planning for an upcoming battle in the Seven Years’ War. Western Massachusetts was on the front line of what was probably the world’s first World War, which involved nearly all major European powers, totally rebalanced power over the entire globe, reduced dramatically the power of Native Americans forever, and set the stage for British imperialism worldwide, for the coming American breakaway, and maybe even for Prussian German ascendency in central Europe.
—Matt Nimetz ’60, New York, N.Y.

My wife and I attended public meetings in New York City to watch Jane Jacobs successfully overturn the Lower Manhattan Expressway proposed by Robert Moses in the mid-1960s and beat back the Spadina Expressway in Toronto a few years later (“A Marvelous Order,” summer 2016). Ms. Jacobs had little use for planners but mellowed a bit toward the end of her life. By then, we planners had embraced the principles she expressed in her seminal work The Death and Life of Great American Cities.

“Behind the Supreme Court Standoff ” (summer 2016) calls the stalemate over the Supreme Court nomination of Merrick Garland “without precedent.” Not so. In 1992, Senate Judiciary Committee Chair Joseph Biden, calling for a “different standard” during an election year, said his committee should consider not holding hearings if President George H.W. Bush named a Supreme Court nominee. (This became known as the “Biden Rule.”) In 2006, then-Sen. Barack Obama echoed Sen. Charles Schumer in promising to prevent any new nominations by President George W. Bush from being confirmed, period—despite it being a full year and a half before the next presidential election. When Samuel Alito was nominated, Obama wanted to raise confirmation approval from the traditional 51 votes to 60. The Constitution’s Article II, Section 2, includes the words that the Senate decides “whether” to act or not. Thus Congress’ Advise and Consent responsibility includes withholding consent as well as giving it and is unrestricted in this regard.