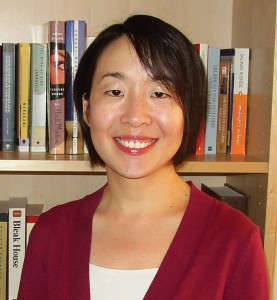 A new book project by history professor Eiko Maruko Siniawer ’97 is delving into how perceptions of waste in post-World War II Japan have shaped—and been shaped by—understandings of affluence and concepts of a good and meaningful life.

With a fellowship from the American Council of Learned Societies (ACLS), Siniawer will spend the next year conducting research and writing full-time. Much of that research will be done in Japan, examining 60 years’ worth of government reports, magazine and newspaper articles, advertisements, children’s books and video games, among other resources that provide “a window into thinking about what people value,” she says.

Women’s magazines, for example, long have placed value on efficient households. But over time the desired result has evolved from efficiency for its own sake to maximizing leisure time, Siniawer says. Meanwhile, postwar consumerism has been tempered by events such as the 1973 oil crisis and the 2011 tsunami and subsequent nuclear disaster—which shifted the focus, at least temporarily, to conservation and restraint.

Her book, titled Affluence of the Heart: Waste in Postwar Japan, will examine waste in its broadest sense—including waste of resources, time, money and material possessions. These ideas “have much to do with defining Japanese national identity and priorities,” she says. “The early postwar focus on minimizing waste of all kinds for the sake of economic growth has given way to concerns about the fetishization of material affluence and its various costs.”

The seeds for the book were planted many years ago while Siniawer was living in Japan, researching the institutionalization of violence in politics there. She and her neighbors took turns making sure their garbage was hauled away each week and cleaning up the area afterward. During one of her shifts, Siniawer came home later than usual to find that someone had already done it for her.

“This started me thinking not just about why there was such attention to garbage and what happened to this waste after it was hauled away, but also what these practices around waste assumed about social structures and daily life,” she says.

Siniawer specializes in the history of modern Japan. In 2008 she published her first book, Ruffians, Yakuza, Nationalists: The Violent Politics of Modern Japan, 1860-1960 (Cornell University Press). She has a Ph.D. in history and a master’s degree in East Asian studies, both from Harvard University.

The ACLS is a nonprofit federation of more than 70 scholarly organizations and aims to support the advancement of studies in the humanities and social sciences.