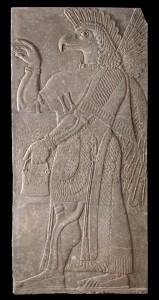 Two ancient reliefs in the permanent collection of the Williams College Museum of Art (WCMA) may be among the few surviving relics of a palace reportedly destroyed by the Islamic State.

The reliefs are carved into panels of gypsum that are each about 85 by 40 by 3 inches and weigh 1,500 pounds. The panels and many others like them once covered the walls of the Northwest Palace of King Ashurnasirpal II, who ruled the Assyrians from 883 to 859 BCE. WCMA’s reliefs show different forms of the protective deity Apkallu. One has the body of a man with the head of a bird; the other is a man wearing what may be a crown.

The site of the palace where they came from, in present-day Nimrud, Iraq, was first excavated in the 1840s by British explorer and amateur archaeologist Sir Austen Henry Layard. Dwight W. Marsh, Class of 1842, a missionary in the region, met Layard and acquired the reliefs for his alma mater, saying he hoped students would “look upon the relics of the past [and] think wisely of time.”The reliefs were the first of their kind to arrive in the U.S.

Nearly two centuries later, they hang in the Stoddard Gallery in WCMA. On a screen mounted nearby is a virtual reconstruction of the Northwest Palace created by the local company Learning Sites Inc. The short video runs on a loop, taking visitors on a tour of what the palace would have looked like when it was built and pointing out where the reliefs were originally located inside. It’s possible this computerized rendition is now the only remaining record of that ancient site.

Historian Magnus Bernhardsson is one of many Williams professors—in fields including anthropology, art history, classics, comparative literature and religion—who teach with the reliefs. He brings the students in his Modern Middle East course to the museum each semester to help them contex- tualize their conversations about history and imperialism. The question of cultural patrimony is one of the many issues they discuss. 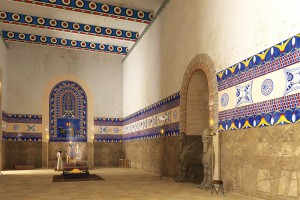 According to the law of the land at the time Layard dug up the reliefs, the excavation of the site was legal. The Ottoman Empire, which had colonized the region, granted permission to unearth and transport objects. “Many Iraqi nationalists have argued that the Ottomans were foreign occupiers who were not concerned with the interests of Iraq and therefore question the validity of the Ottoman decree,” says Bernhardsson. “This is a similar argument that the Greeks have been using regarding the Elgin Marbles now at the British Museum.”

While Iraqi nationalists are not seeking the repatriation of the reliefs at WCMA, recent allegations of destruction by the Islamic State have prompted discussions about cultural and natural resources removed from Iraq over time. It’s in that context that many students view the reliefs today.

Says Bernhardsson, “They often evoke diametrically opposed emotions and political views among students. And that conversation serves as a starting point to discussing our role at WCMA, in the wider college community and in society in general.”