Professor’s App Reaches for the Stars 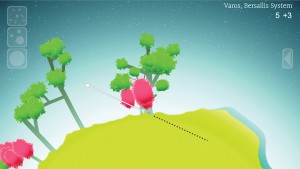 The objective: Sink a putt and then hurtle through an unexplored universe, avoiding asteroids and interacting with aliens until you reach the next planet, and hole, on a galactic golf course. Along the way, you’re learning about space travel and astronomy.

This is Project Rocket Golfing, computer science professor Morgan McGuire’s latest video game. Over the past six years, he’s worked on games like Call of Duty, Guitar Hero and Skylanders, but this is his first solo effort since coming to Williams in 2006. Available for Apple devices, it marries addictive, simple gameplay with facts about space exploration in a family-friendly environment (meaning no violence or in-app ads or purchases).

Usually, ideas that come out of the game jam are scrapped, since the goal is “to build community and recharge our creativity,” McGuire says. But Project Rocket Golfing was well received, and he was encouraged to develop it further.

The game is simple to play but relies on complex programming such as proce- dural generation, an algorithmic technique that allows each player’s universe—the backgrounds and scenarios—to be unique.

The algorithm creates planet names rooted in a variety of languages, including French, Mandarin, Swahili and English. Each level of the game is introduced with quotations drawn from a wide range of sources, including Carl Sagan, Octavia Butler and Buzz Aldrin. All of this is meant to convey to players that science is a field open to anyone who chooses to pursue it.

“Space exploration is a project that requires the entire human race,” McGuire says. “I wanted the game to express that we’re all on Earth together and to inspire players to reach for the stars.”