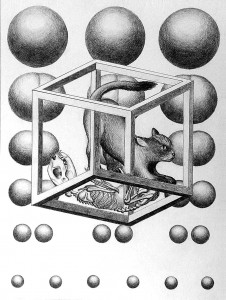 In their course, McPartland and Wootters used Schrödinger’s Cat, a thought experiment devised by the Nobel Prize-winning physicist Erwin Schrödinger in 1935, to illustrate how quantum mechanics can be illogical. Inside a sealed box are a cat, a quantum particle in an equal superposition of two states and a bottle of poison that breaks open—killing the cat—if and only if the quantum state collapses in one of the two possible ways. Says Wootters: “Before we’ve opened the box and made a measurement, quantum mechanics allows us to describe the particle, the detector and the cat itself as being in an entangled superposition”—neither alive nor dead. Which, says McPartland, “makes us wonder how vast a gulf lies between some of our most firmly held common-sense beliefs and the implications of our best scientific theories.”

“Some of the discoveries made by physicists over the last century seem to show that our common-sense views are deeply at odds with our most sophisticated and best confirmed scientific theories.”

So begins the description for Philosophical Implications of Modern Physics, a new course taught this past spring by philosophy professor Keith McPartland and physics professor William Wootters. Students spent the semester exploring what relativity theory and quantum theory could tell them about the nature of space, time, probability and causality.

By way of example, Wootters, the Barclay Jermain Professor of Natural Philosophy, describes how a quantum particle like a photon of light can be in a “superposition.”  That is, it’s understood to exist in two different states at once. As soon as a scientist measures the particle, however, the superposition collapses, and the measurement reveals the particle to be in only one state. This phenomenon lends itself to philosophical questions such as whether the measurement caused the change, whether the photon was really in both states simultaneously in the first place and whether observing something fundamentally alters its state.

The professors took turns leading the class and then participating alongside their 24 students, asking questions and taking notes. Because most of the students were either philosophy or physics majors, the challenge for both McPartland and Wootters was to present the ideas in their fields in a different way.

The course has its roots in a faculty study group convened several years ago to discuss the fundamental concerns of quantum physics. McPartland—who long has been interested in the philosophy of science—joined. “I’m interested in questions about what exists,” he says. “Some scientific theories can be interpreted in different ways to give you different answers to that question.”

When the study group ended, McPartland and Wootters continued to meet over lunch to discuss how their fields overlapped. Their conversations continued when Wootters joined a faculty reading group organized by McPartland to explore philosophical questions about the foundations of physics.

“There are problems in the interpretation of quantum theory that are at least as much philosophical problems as physics problems,”

Wootters says. “Quantum theory works extremely well in practice, but we have a very hard time fig- uring out what it’s telling us about the world.”

For John Russell ’16, a philosophy and physics major, the course—which McPartland and Wootters plan to teach again— seemed tailor-made. He says it revealed frictions between one’s ontology, or theory about the nature of being, and one’s under- standing of the physical world. “Philosophers have no qualms about saying that stuff is out there even if we are unable to observe it,” he says. “But physicists need to be able to empirically test that something exists.”

Says Bryn Reinstadler ’15, a chemistry major who spent nearly as much time in philosophy classes as science ones, “It can be easy to unquestioningly accept the black-and- white view that science offers, but I think it’s useful to train the scientist part of my brain to accept the gray in life.”