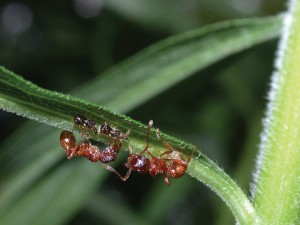 The project, funded with a $244,117 National Science Foundation grant, is being led by biology professor Manuel Morales and chemistry professor Enrique Peacock-Lopez. Their goal is to understand how species interact with and affect one another.

As the principal investigator, Morales is leading the fieldwork and analysis on a system involving an aphid-like insect called a treehopper, the tall goldenrod plant on which it feeds, and the ants that protect the treehopper from predators.

“Like many mutualisms, the one between the treehopper and the ant involves the exchange of a resource reward for protection from predators,” says Morales. “We want to know what the long-term effects are on the plant at the center of this mutualism. How long does it take the goldenrod to recover after treehoppers have fed on it? And what can we learn from how treehopper populations disperse over a field of goldenrod?”

The short-term effect of mutualism is to increase the population of the plant-eating insect. That can lead to over-exploitation of the plants in the long-term, which will ultimately harm the insects’ ability to feed. “Conventional wisdom is that mutualisms stabilize ecosystems,” says Morales. “Our research suggests that in some cases the opposite may be true.”

Michael Chen ’18 and Graham Buchan ’17 are working with Morales to collect goldenrod samples and apply sprays that cause the plants to produce anti-herbivore chemicals, experimentally narrowing the range of dispersal patterns. Their work will inform that of Peacock-Lopez, who has created a mathematical model that accounts for time-dependent changes in the system. Because the model is being updated with information from the field, it can better measure treehopper population dispersal.

The two professors began collaborating several years ago, after they saw each other’s research at a Summer Science Research Program poster session. Of this summer’s research, Peacock-Lopez says, “It’s an incredible opportunity for the students to be able to interact among the disciplines. That can only happen at a college as small and integrated as Williams.”