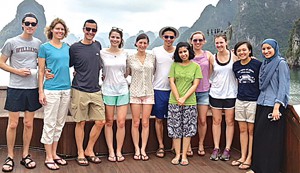 Inspired by a spring break trip with her history class, Rachel Nguyen ’16 is spending the summer in Vietnam, working on a documentary film about identity, displacement and community.

Funded by a Russell H. Bostert Memorial Fellowship research grant, the history major will spend two months in Hanoi and Ho Chi Minh City (formerly Saigon), filming and interviewing locals with the help of a translator. She also plans to interview Vietnamese refugees in the U.S.

Nguyen’s parents were part of the wave of people evacuated by U.S. troops in 1975 at the fall of Saigon. But she didn’t learn the details of her family’s history until just before the spring break trip, part of the course War and Remembrance in Vietnam, taught by history professor Jessica Chapman.

“It was hard to picture a past beyond my parents’ immigration here,” Nguyen says.

Her maternal great-grandfather was a well- known businessman who ran the Xa? bo?ng Co? Ba soap company until it was nationalized by the Vietnamese Communist Party.

For her documentary, Nguyen plans to use the company, which remains an iconic brand in Vietnam, as a lens for exploring how the country has changed through periods of imperialism, colonialism and communism.

“Talk of my ancestors was a part of my upbringing, but they were just kind of pictures on the altar,” says the California native, who on her father’s side is the seventh descendant of a famous Vietnamese poet. “In the U.S., my parents are in the working class. … It’s incredible to understand that their history is more complicated than that.”

So, too, is Vietnam’s history, which Nguyen and other students in Chapman’s class were able to understand more deeply by comparing scholarly readings to their firsthand experiences in the country.Their visits to war museums and conversations with Vietnamese people over spring break helped students view Vietnam outside the framework of U.S. history, Chapman says.

“The trip was an opportunity for students to go straight to the primary sources analyzed in the course readings and interpret them on their own terms,” she says. “They understood a lot more about the Vietnamese state’s relationship to war memory than the average international tourist and were thus able to engage more critically with what they saw, read and heard, and to place their reactions in conversation with scholarly works.”

Nguyen will continue to work on her film when she returns to campus in the fall. Though she hasn’t decided what she’ll do with it when it’s finished, she’s grateful that the class and research fellowship opened the door to understanding a crucial part of her identity.

“Learning all this history has been great,” she says, “and it’s all come from the prospect of going (to Vietnam) last spring.”