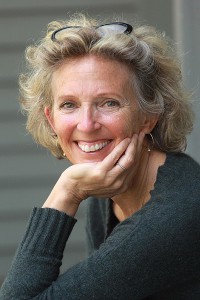 Twelve years ago, Susan Engel was talking with a group of teachers who were criticizing the standardized testing model that’s now a major focus in American education. “I kept asking, ‘What do you want the kids to learn?’” she says. “The word ‘curiosity’ kept coming up.”

And so began years of research that resulted in two books: The End of the Rainbow: How Educating for Happiness (Not Money) Would Transform our Schools(The New Press, February 2015) and The Hungry Mind: The Origins of Curiosity in Childhood (Harvard University Press, March 2015).

While The Hungry Mind talks about ways to measure curiosity, The End of the Rainbow focuses on teaching students in ways that will help them retain curiosity and passion later in life.

So instead of having third-graders add and subtract numbers of skateboards to make a math problem more palatable, Engel says, teachers could ask pupils to develop a skate park. The lesson offers room to explore many topics at once, such as dimensions, accounting and architecture—and the students can feel ownership of the idea and the process of learning.

School, Engel says, “should be a ticket to other aspects of life that provide happiness”—a sense of community, or the chance to figure out your passions and build on them through your life. “The most important task … is to make school a place students want to be.”

A developmental psychologist and former schoolteacher, Engel is a senior lecturer in psychology and the Class of 1959 Director of the Program in Teaching. She’s been at Williams for 25 years and is the co-founder of the Hayground School in Bridgehampton, N.Y.

From The End of the Rainbow: 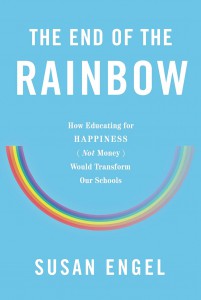 Imagine that you are in charge of a school. You already have decided that in order to succeed the school will have to be a place where children want to spend their day. You realize that the first step is to articulate a compelling set of goals. These goals cannot just look good on a piece of paper in September or June. … Instead you want to come up with concrete goals that mean something specific and real in everyday life. If met, these goals will ensure that kids are leaving your school more thoughtful, more engaged and thus happier than they otherwise would be.

Let’s say you’ve also come to realize that it is a travesty to use school as a job-training program. Getting educated and getting trained for a job are different. School should be the place where children become educated. Imagine you’ve thought long and hard about how schools can put children on the path to living decent, meaningful, satisfyng lives. What are the abilities and dispositions that set children on that path? What would a school look like if it made happiness, rather than money, the pot of gold at the end of the rainbow?

It’s actually not that complicated, and it all comes down to a fairly simple list:

• Become immersed in complex and meaningful activities
• Develop a sense of purpose
• Acquire an eagerness for knowledge, and the ability to get it
• Think about things fully
• Become good at things
• Contribute to one’s community
• Appreciate and understand those who are different from you
• Read for pleasure and for information

The next question is this: What would a school where children could acquire these abilities and dispositions look like?