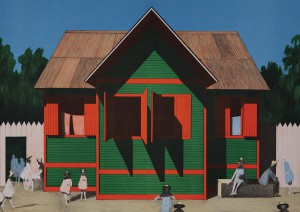 Cuban-born artist Emilio Sanchez is known for his bright, sunny prints—welcoming pieces that also have an air of mystery. Searing sunshine highlights architectural details of homes, buildings and landmarks and plays against darkened doors and windows, keeping the secrets inside those structures safe, leaving the viewer to wonder.

The Williams College Museum of Art (WCMA) has dozens of Sanchez lithographs, including depictions of Puerto Rican windowsills, New York skyscrapers and Vermont estates. Though his works were last displayed at the museum in 1978 during a solo exhibition, they take on new significance as the U.S. and Cuba work to improve relations.

“The minimalist way he deals with architectural space, color, shadow and light are all ways to evoke memory and relationship to a site without being very specific,” says Lisa Dorin, WCMA’s deputy director of curatorial affairs. “It makes them more universal, in some ways.”

Sanchez left Cuba in 1944 to study at the Art Students League of New York. He traveled widely during his career and lived in New York until his death in 1999. Though his work depicts buildings all over the world, his preference was work that referenced Caribbean houses or landscapes, like Casita Criolla (above).

“I’ve always been a terrible Cuban,” he said in a 1967 interview that coincided with an exhibition of his work at the Brooklyn Museum of Art. “I’ve never lived there. And I became more aware of it when I was away.”

Dorin says his lithographs have a lot to offer Williams scholars. Art students can see the work of a career printmaker whose lithographs have been the subject of 40 solo shows and is represented in 30 museum collections. And they’re an excellent primary resource for anyone seeking cultural context for Cuban history.