With its traditional, white clapboard siding offset by sleek, black solar panels, its rooflines pitched to maximize rainwater collection, and its newly planted gardens promising food for people, wildlife, birds and insects, it’s impossible to miss the Class of 1966 Environmental Center.That’s the point. 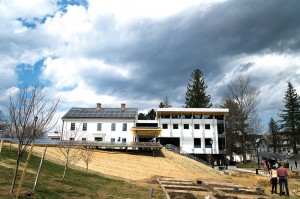 And while all major construction projects on campus must seek at least LEED-Gold certification—a high standard for green building adopted by Williams’ Board of Trustees in 2007—the environmental center is looking to achieve something more. It was one of the first 80 projects in the nation to register for the Living Building Challenge (LBC), a set of strict performance goals developed by the International Living Future Institute (ILFI). While some 270 projects around the world have registered since 2006, only eight buildings to date have received full LBC certification.

To meet the LBC, the environmental center and its occupants must prove, starting in late summer, that they can live within their means for a full year. That involves, in part, using only the power and water produced and collected on-site—no easy task, with heavy use expected for its classrooms, kitchen, library and meeting spaces. Adding to the complexity is the fact that the environmental center, built on the bones of the 1794 Kellogg House, is one of the first historic renovations to pursue LBC.

“Retrofitting a 220-year-old building to 21st-century performance standards is a remarkable achievement,” Bill Moomaw ’59, chief scientist at the Earthwatch Institute, said when the building was dedicated in April. “Marrying it to a structure that’s designed from the start to meet 21st-century requirements is a bold step.”

In fact, it’s possible Williams won’t meet the standards initially. “LBC is a learning process as much as it’s about living within our means,” says Mike Evans, assistant director of the Zilkha Center. “There are risks involved, but we’ll learn from our mistakes, make adjustments and, if need be, start the clock again.”

It’s a risk worth taking, says Charley Stevenson ’93, who, as principal of the Williamstown consulting firm Integrated Eco Strategy, worked closely with the college and Black River Design Architects on the project and was named a 2015 Living Building Challenge Hero in April. “I think it’s really important from a leadership perspective,” he says. “What Williams does, other institutions take note of.” 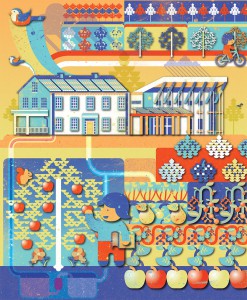 Most commercial and residential buildings are “imposed on the ecosystem,” says David Dethier, chair of the project committee and the Edward Brust Professor of Geology and Mineralogy. According to the Environmental Protection Agency, they account for nearly 40 percent of total energy consumption and carbon emissions in the U.S., and that doesn’t include the “embodied energy” required to extract, manufacture, transport, install and dispose of all the products that go into them.

LBC reimagines the built environment. “The LBC philosophy is that buildings should be part of the ecosystem, and maybe even work to improve it,” Dethier says.

That philosophy appealed to the project committee, which comprised a dozen Williams faculty, staff and students, as well as consultants, architects and green builders, many from the local and alumni community.

To receive LBC certification, a project must accomplish 20 “imperatives” organized into seven “petals”—place, energy, water, health and happiness, materials, equity and beauty—each with a clear intent. The purpose of the water petal, for example, is “to realign how people use water and to redefine ‘waste’ in the built environment, so that water is respected as a precious resource,” according to LBC. The intent of the materials petal is “to induce a successful materials economy that is non-toxic, transparent and socially equitable.”

These two petals in particular were daunting in their complexity.

“There was a point in this project when it occurred to me that this is not about a perfect building,” Stevenson says. “It’s about using the wish for a perfect building as a fulcrum from which to move the market.”

Water was a particular challenge. Though there were hookups for municipal supply and treatment on site, LBC prohibits using them. So, drawing from more than 100 years of precipitation data from nearby Hopkins Forest, the project team designed a supply system that’s expected to meet all the building’s water needs in most years. A rooftop capture system acts like a pristine forest watershed, and a 6,000-gallon cistern mimics a typical surface reservoir. The team worked with regulators to establish that the potable system could use small-scale versions of municipal water treatment technologies, creating the first non-chlorinated rooftop public water supply in the Commonwealth of Massachusetts. 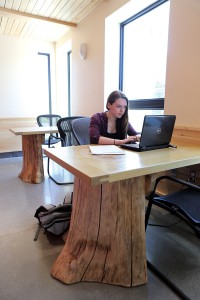 Treatment of gray water (used in bathroom and kitchen sinks as well as by the dishwasher) required similar regulatory creativity. Water leaving the building is processed through a man-made wetland cell and sand filter before seeping back into the ground (meaning only biodegradable cleaning products can be used inside the building). Because the environmental center’s system meets a higher quality standard than that of a standard septic system, it was permitted as a pilot project under state regulations and is the first of its kind in Massachusetts.

Storm water management on site is designed to mimic prehistoric conditions, collecting water in a series of rain gardens to allow sediments to settle out. The water that’s not reabsorbed into the ground will leave by evaporation or transpiration, reducing strain on the watershed.

“Capturing rainwater may be of limited economic value to the college,but Williams has created a regulatory pathway where none existed before,” says James Connelly, director of the Living Product Challenge at ILFI. As a result,“In a decade, thousands of buildings will be using rainwater, which the jurisdiction previously considered waste or storm water.”

Meeting the requirements of the materials petal also required creativity and leadership. The building’s siding is a case in point. LBC requires all wood in a project to come from sustainably harvested, living forests certified by the Forest Stewardship Council (FSC). It also requires locally sourced products.

Meanwhile, traditional New England cladding—the kind that’s consistent with the period during which Kellogg House was built—is typically made from Eastern spruce. But there were no FSC-certified forests on the East Coast that produced spruce logs large enough for the project. Since supporting a sustainable economy is the highest priority for LBC, the college obtained FSC-certified red cedar from a mill in British Columbia.

LBC projects are also prohibited from using 14 classes of toxic chemicals like phthalates and formaldehyde that become concentrated inside the bodies of living things and can threaten public health. The so-called “Red List” encompasses 362 actual chemicals, many of which aren’t tracked in the manufacture of building components.

“We’re sort of down a rabbit hole on all these things,” says Stevenson, who sourced nearly 1,000 building products in the environmental center, down to each electrical socket. That involved thousands of phone calls, letters and, sometimes, protracted conversations with manufacturers, persuading them to disclose their ingredients and eliminate the chemicals from their products.
There were many success stories. After Stevenson signed a nondisclosure agreement, Benjamin Moore & Co., the paint manufacturer, provided an ingredient list for all the products he asked for—information the company typically doesn’t share. Harmsco Filtration Products reformulated its carbon filtration system, replacing PVCs with urethane. Stancor Pumps Inc. eliminated PVCs from its wiring. Now these firms and others are beginning to use their new formulations to differentiate themselves in the market, in some cases adding them to ILFI’s database for healthy products, called Declare.

In fact, a key aspect of LBC is its role as an advocacy tool, says Stevenson. “I picture LBC as an army of ants. No one can move all that much, but each is picking something up and moving it some distance. It’s an accumulation of little things that is ultimately profound.”

Says Ed “Punky” Booth ’66, who with his classmates is supporting the environmental center with a 50th reunion gift, “It’s about driving technology and the business of building forward and making a statement that this can be done. This building is addressing the issue of the next round of big change that is coming.”

The Class of 1966 Environmental Center opened in the spring, “a marvel of sustainable materials choices, innovative design elements and a mix of useful teaching and program spaces,” Moomaw said during its dedication. But its work to meet LBC has just begun, and there are many unknowns that make it an ideal living laboratory.

“We don’t know if everything is going to work,” Dethier says. “That’s part of the process.” 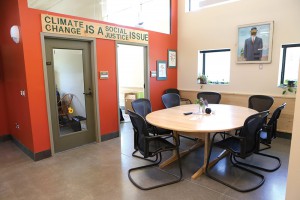 Computer science professor Jeannie Albrecht and her students are involved deeply in that process. With a $161,260 National Science Foundation grant, they’ve developed sensors to monitor energy consumption, and they’ll use the data to implement standards to help the building meet the LBC. A visualization tool designed by math and computer science major Sarah Abramson ’15 allows occupants to see both the immediate and long-term energy use of a given appliance.

Once the data are collected and analyzed, Albrecht envisions working with colleagues in the economics and psychology departments, and their students, to study how to incentivize conservation. “From the psycholo- gist’s perspective, can we actually influence and change behavior?” she asks. “From a computer scientist’s standpoint, can you assure privacy isn’t violated? And from the economist’s side, what incentive do people have if they’re not paying the bill?”

In the meantime, there are many opportunities for scientific research. Caroline Atwood ’16 is working with Dethier this summer mapping the environmental center site’s drainage basin to figure out how much water is being collected, cycled through the system and used. Stephen Mayfield ’16 is examining the site’s hydrology with Jay Thoman ’82, Williams’ J. Hodge Markgraf ’52 Professor of Chemistry.

While the new environmental center is an ideal home for the academic, programmatic and experiential aspects of environmentalism at Williams, perhaps its biggest effect will be on the wider community. John Rahill ’68, the building’s architect, says the connection between indoor and outdoor spaces will “inspire an engagement with the environment”—something at the heart of LBC’s beauty and happiness petal, intended “to recognize the need for beauty as a precursor to caring enough to preserve, conserve and serve the greater good.”

“Someone might not make a full commitment by knocking on the front door but suddenly becomes part of the building,” he says. “It works as an attractor—the math major who doesn’t care about environmental studies but sees people sitting around in a comfortable location or sees a group inside having an animated meeting. Somehow those barriers to explore are broken down.”

Says Lauren McDonald ’12, a program committee member who’s now an apprentice at the Poughkeepsie Farm Project in Poughkeepsie, N.Y., “By building a building that embodies all the principles Williams is trying to teach students and trying to spread to the community, it’s a much more powerful way to do it than just having somebody read it in a book.”