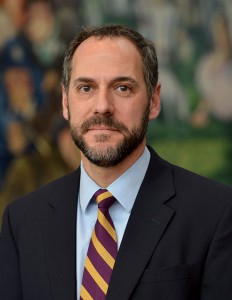 As an educator, as a father—as a human being—I hope for a day when sexual violence does not occur. But we can’t wish this problem away. As Williams’ president, it’s on me to speak about this scourge, to tell you how we’re addressing it at Williams and to lift up the work of those who’ve committed themselves to supporting survivors of sexual violence and to ridding our campus of it for good.

That’s why the article “Standing Strong Against Sexual Assault” may be the most important article that Williams Magazine has ever published. I urge you to read every word.

The college has been working urgently to address sexual assault for years, and it has been my very highest student priority since I began as president in 2010. Dean of the College Sarah Bolton led a comprehensive survey of our students in the spring of 2011, the results of which revealed that 5 percent of female students reported having been raped in the previous 12 months, and many more—male and female—had experienced some kind of nonconsensual sexual touching. The effects of sexual assault are devastating, and the only acceptable rate of incidence is zero. Until we get there, nothing is more important.

And so by fall 2011 we incorporated sexual assault prevention and response education into our JA training, and we convened the Sexual Assault Prevention and Awareness task force, still in existence, to examine every aspect of this work and to build upon it. We hired staff with expertise in preventing and responding to sexual assault, and, most importantly, we’ve partnered with students to bring about the cultural changes needed to eliminate sexual assault at Williams. I started talking openly about the problem in a letter to the community in February 2012. We’ve continued that commitment to openness, publicly sharing data every year on the prevalence of sexual misconduct, including the numbers of reports and their outcomes.

My personal commitment, as firm as any I can make, is that sexual assault must be eliminated in our community. —Williams President Adam Falk

Last fall, I was honored to be invited to the White House for the launch of its bystander campaign, It’s On Us. At that event, President Obama pointed out that the work his administration is supporting builds on what students are doing within their own campus cultures. I agree. The problem of sexual assault is widespread, and we have much to learn from other campuses, but the solutions we create here are specific to Williams, building thoughtfully on our own best traditions. At Williams, for instance, we know that change comes when the whole community unites in working for it, and with this issue, as with so many others, everyone feels a responsibility to address it.

Let me be frank about one more thing. Over the history of this country, there’s much to be ashamed of in our response to sexual violence. Survivors too often have been ignored, minimized, blamed and re-victimized. Only in recent years has this situation improved, and even now it’s far from perfect. At Williams, too, we’ve not always done nearly as well as we should have in addressing sexual assault. I wish it were otherwise, but we exist within our society and all too often share its flaws.

We acknowledge this history, however, to more clearly see the future. My personal commitment, as firm as any I can make, is that sexual assault must be eliminated in our community. With the dedicated work of the students, staff, faculty and alumni you can read about in this magazine, I’m confident that we’re on that path. We won’t rest until we get there.