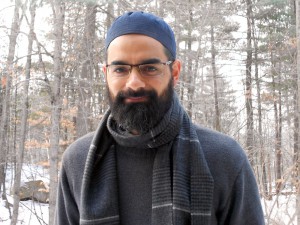 Sharif Rosen joined the Williams community in February as Muslim chaplain and assistant director of the Center for Learning in Action (CLiA). Rosen is the second person to serve in this role, which strengthens the partnership between the chaplain’s office and CLiA.

In addition to serving as a religious, programmatic and educational resource to Muslim students, Rosen is collaborating with the college’s three other chaplains to enrich religious and spiritual life at Williams.

He’s also working to encourage student service, advise student organizations and develop community partnerships. He previously served as Muslim and multi-faith adviser at Dartmouth College and as a volunteer prison chaplain, and he is a trained sexual assault responder.

“The experience Sharif brings as a coordinator of engagement in educational as well as community-based organizations will serve him particularly well,” says Rick Spalding, college chaplain. “He brings a deep grounding in his own spirituality and in well-informed respect for other religious and spiritual practices.”

Rosen’s mother’s roots are Roman Catholic, and his father is an “orthodox Agnostic” from a Jewish family. Says Rosen: “I found a vibrancy in the example of the Prophet Muhammed (peace and blessings be upon him) that only resonated more fully when I saw its traces, in all its beauty, among those dedicated to living by and preserving it.”