By Claudia Rankine ’86 and Beth Loffreda 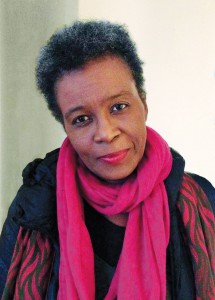 In 2011, poet Claudia Rankine ’86 put out an open call for letters discussing the creative imagination, creative writing and race. Responses were first posted online and have been collected into a publication due out in March titled The Racial Imaginary: Writers on Race in the Life of the Mind (Fence Books), which Rankine co-edited with writer Beth Loffreda.

An excerpt from the introduction of their new book follows:

Writing rests on the faith that there is something of value in witnessing an individual mind speaking in and to its ordinary history. And something valuable happens when a writer reflects on race in the making of creative work. And since race is one of the prime ways history thrives in us, it matters that each writer says her own thing.

But writers writing about race these days tend to invoke several tropes. I met an other and it was hard! That is lightly said, but at its essence are the anxious, entangling encounters that happen before anyone makes it to the page. I needed to travel to “meet” race, I went to Africa or to Asia or to the American South or to South America to look at race, as if it now mainly can be found in a sort of wildlife preserve separate from everyday experience. And then there is the enduring American thing of seeing race as a white and black affair, where only the black people are raced and the white people write about them when asked to think about race, rather than writing about themselves. Whites still need the contrast, it seems, to see their own race, and even when seen, so often the vision remains myopic.

So to say, as a white writer, I have a right to write about whoever I want, including writing from the point of view of characters of color is to begin the conversation in the wrong place. Our imaginations are creatures as limited as we ourselves are. They are not some special, uninfiltrated realm that transcends the messy realities of our lives and minds. To think of creativity in terms of transcendence is itself specific and partial. And it is not only white writers who make a prize of transcendence. Many writers of all backgrounds see the imagination as ahistorical, as a generative place where race doesn’t and shouldn’t enter. In this view the imagination is post-racial. To bring up race for these writers is to inch close to the anxious space of affirmative action, the scarring qualifieds.

Many writers of all backgrounds see the imagination as ahistorical, as a generative place where race doesn’t and shouldn’t enter. —Poet Claudia Rankine ’86

So everyone is here.

We want to linger over a few dynamics that seem to exert the strongest pressures on these operations of race in creative life. It is striking to see how many white writers conceive of race and the creative imagination as the question of whether they feel they are permitted to write a character, or a voice, or a persona, “of color.” That conception itself points to the whiteness of whiteness—that to write race would be to write “color,” to write an other, rather than to write whiteness, to consider the privilege and intellectual property value of whiteness. What we’re describing here is a dominant racial imagination. What white artists might do is not imaginatively inhabit the other because that is their right as artists, but instead embody and examine the interior landscape that wishes to talk about rights, about access, that wishes to move freely and unbounded across time, space and lines of power, that wishes to inhabit whomever it chooses.

It should also conversely not be assumed that it is “easy” or “natural” to write scenarios or characters whose race matches (whatever that might mean) one’s own. This is the trap that writers of color still must negotiate; it’s the place where “write what you know” becomes plantational in effect.

Are we saying that no one can write from a different racial other’s point of view? We’re saying we’d like to change the terms of that conversation. To ask instead why and what for, not just if and how. What is the charisma of what I feel estranged from, and why might I wish to enter and inhabit it? To ask what we think we know, and how we might undermine our own sense of authority. To not assume that the presence of race deforms the lyric, renders the lyric sadly earthbound. We are ourselves earthbound. And race is one of the things that binds us.

What we want to avoid at all costs is an opposition between writing that accounts for race and writing that is “universal.” If we continue to think of the “universal” as the pinnacle, we will always discount writing that doesn’t look universal because it accounts for race. The universal is a fantasy. But we are captive to a sensibility that defines the universal, still, as white. We are captive, still, to a style of championing literature that says work by writers of color succeeds when a white person can nevertheless relate to it. To say this book by a writer of color is great because it transcends its particularity to say something “human” is to reveal the racist underpinning that people of color are not human, only achieve the human in certain circumstances. We could try to say instead that in the presence of good writing a reader is given something to know. Something is brought into being that might otherwise not be known.

The racial imaginary changes over time, in part because artists get into tension with it, challenge it, alter its availabilities. Sometimes it changes very rapidly, as in our own lifetimes. But it has yet to disappear. Pretending it is not there—not there in imagined time and space, in lived time and space, in legislative time and space—will not hurry it out of existence. Instead our imaginings might test our inheritances, to make way for a time when such inheritances no longer ensnare us. But we are creatures of this moment, not that one.

Claudia Rankine ’86 is the Henry G. Lee Professor of English at Pomona College. Her most recent book, Citizen: An American Lyric (Graywolf Press, 2014), was a finalist for the National Book Award for Poetry in 2014. Beth Loffreda is associate professor of American studies and creative writing at the University of Wyoming. She is the author of Losing Matt Shepard: Life and Politics in the Aftermath of Anti-Gay Murder (Columbia University Press, 2000).