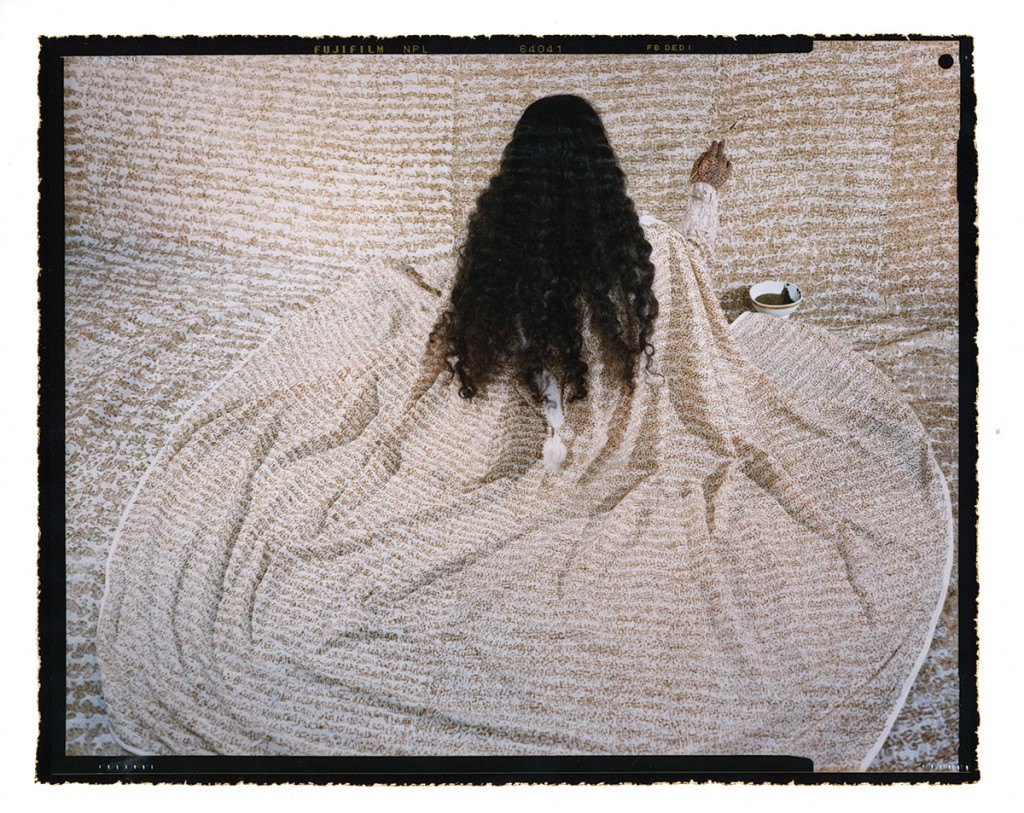 Lalla Essaydi’s artistic work is at once imposing and intimate. Converging Territories #10, part of the Williams College Museum of Art (WCMA) collection, is a large-format, nearly life-sized self-portrait. Yet the scene Essaydi depicts—she is seated, with her back to the viewer, amid pools of white fabric that she’s covering with Arabic calligraphy—evokes a domestic space.

The artwork is one of 30 photographs in the series Converging Territories, an exploration of gendered space in the traditional culture of Morocco, where Essaydi grew up. Converging Territories #10 is studied in many courses across the Williams curriculum, including Africana, Arabic and Latina/o studies, art history, comparative literature, studio art and history. This semester, it’s one of the works being explored in the interdisciplinary course Contemporary Art of the African Diaspora, taught by Maurita Poole, the museum’s Mellon Curatorial Fellow for Diversity in the Arts.

Converging Territories #10 has been included in several WCMA exhibitions, including last October’s “Race in the Life of the Mind,” developed by poet Claudia Rankine ’86 in conjunction with a reading from her book Citizen: An American Lyric (Graywolf Press, 2014). Rankine is compiling written and creative responses to the exhibition for a publication (printed as part of WCMA’s Publication Studio) related to her latest book, The Racial Imaginary: Writers on Race in the Life of the Mind (Fence Books), due out in March.

Essaydi, who now lives in the U.S., has worked in several media, including painting, video, film, installation and analog photography. Her photographs often feature women dressed in fabrics inscribed with henna calligraphy; the women are posed in front of abstract backgrounds that use the same cloth and are covered in the same script.

“In my art,” Essaydi says in her artist’s statement, “I wish to present myself through multiple lenses—as artist, as Moroccan, as traditionalist, as Liberal, as Muslim. In short, I invite viewers to resist stereotypes.”

Essaydi said in a 2012 Q&A with PBS NewsHour that she sees her work as “intersecting with the presence and absence of boundaries; of history, gender, architecture and culture; that mark spaces of possibility and limitation. That is my story as well.”