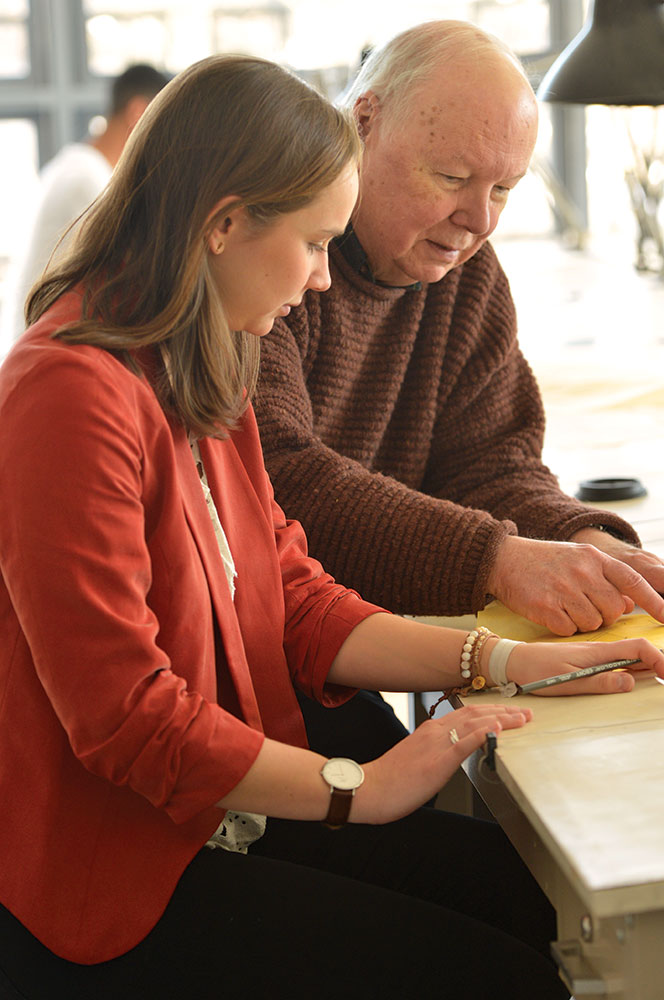 Williams » Williams Magazine » Spring 2015 » Features » The Italian Job
With the help of art major Grace McEniry ’12, E.J. Johnson ’59 discovers the architect behind a famous, temporary theater built in the 16th century to celebrate France’s new king and his Italian queen.

In the light-filled architecture studio on the second floor of Spencer Studio Art building, Grace McEniry ’12 spent the Winter Study of her senior year hunched over a drafting table, painstakingly recreating a vanished Italianate theater from 16th-century France.

Working from centuries-old descriptions, she drew an architectural facsimile that would eventually prove critical in Professor E.J. Johnson’s quest to solve a historical mystery: Who designed the temporary structure that played a starring role in the 1548 celebration of Henry II’s royal entrance into Lyon, France, with his new wife, Italy’s Catherine de’ Medici?

“Never have I collaborated with a student to this degree, where the outcome of an article actually depended on what the student did,” says Johnson, the college’s Amos Lawrence Professor of Art, whose book Inventing the Opera House: Theater Architecture in Renaissance and Baroque Italy, currently under review by a major university press, contains a chapter based on his and McEniry’s work.

For McEniry, an art major, the task was an ideal combination of art history and practice. “All the other architectural projects I’ve worked on have been contemporary designs, schemes meant to be situated in today’s world,” she says. “This was particularly interesting because it allowed me to directly relate contemporary studio practice with architecture from the 16th century.” 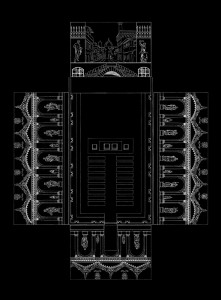 Johnson became intrigued by the mysterious theater in the course of researching his book, which explores the architecture of theaters in Italy in the 15th, 16th and 17th centuries. Although the structure had been built in France, it was clearly the work of Italian architects and builders. “It was an Italian job,” Johnson says; as such, it belonged in the book. Yet the theater’s designer was unknown, and no drawings of the original building survived.

Johnson started digging and soon found a contemporary account of the theater written by an Italian identified only as “F.M.” and reprinted by a British scholar. As he worked to translate the document from 16th-century Italian into modern English, Johnson noticed that the recorded measurements were unusually precise, and he wondered if perhaps there were enough data to create a reasonably accurate replica.

“Reconstructions are tricky,” he says. “You can’t necessarily trust them. But if you’ve got that much information, you can do something reasonable. I wanted to see what it looked like. But since I couldn’t draw it, I had to find someone who could.”

When a teaching assistant withdrew from Johnson’s legendary Art History 101 course, McEniry was tapped for the job. “The head TA called me and said, ‘Are you still an art major?’” McEniry says. “I said, ‘Yes!’”

Johnson and McEniry hadn’t met before. “It was entirely lucky,” Johnson says. “Then I found out that Grace was an art history and practice major, which suggested that she knew how to draw. We got to talking.”

Their conversation led to a proposal for an independent project, and, with the enthusiastic approval of the Winter Study program committee, McEniry was soon immersed in the 16th century, studying a temporary theater designed to ease the introduction of an Italian-born queen to her skeptical French subjects. “The point of this theater, in good part, was to raise the status of Catherine de’ Medici, because the French were not happy to have the descendant of a banker as their queen.”

Although the Medicis were rich and powerful, controlling Florence and much of Italy, their bloodline—in the status-obsessed milieu of 16th-century Europe—was considered questionable. To bolster Catherine’s aristocratic credentials, the theater’s architect included statues representing the great figures of Tuscan literature, including Dante, Boccaccio and Petrarch. Opposite these stood a squadron of warriors and rulers, including Catherine’s father, Lorenzo, the Duke of Urbino. Painted female figures— representing Tuscan cities under Medici control—flanked by many-colored dragons with torches affixed to their fiery tongues further burnished Catherine’s status as the member of a ruling family that by that time had produced two popes.

“The point of this theater, in good part, was to raise the status of Catherine de’ Medici, because the French were not happy to have the descendant of a banker as their queen.”

McEniry and Johnson met regularly throughout Winter Study to compare notes. And when the drawings were complete, Johnson was deeply impressed by McEniry’s accomplishment. It was clear from the drawings that the theater was the work of a skilled architect, yet Johnson was still baffled about the identity of the designer.

“Once I saw what the theater looked like, I realized it was good,” Johnson says. “It wasn’t a piece of junk. It was designed by somebody who knew what they were doing.”

With McEniry’s drawings in hand, Johnson began to sift through countless images in architectural studies and manuscripts. One picture leaped out: a photograph of Le Cha?teau d’Ancy-le-Franc in Burgundy, designed by a Bolognese architect named Sebastiano Serlio. 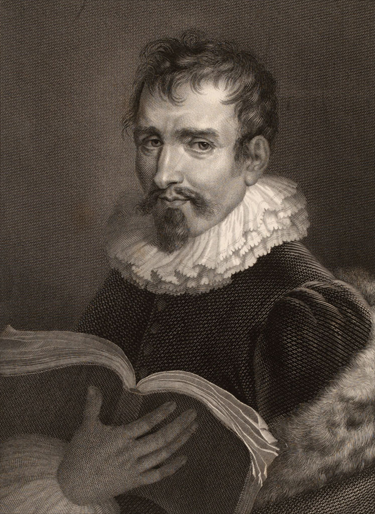 “At first, Serlio seemed too easy,” Johnson says. “And his name isn’t mentioned in any of the accounts, which I attribute to the fact that he was not Florentine.”The only two artists mentioned in the documents were both Florentines—a visiting sculptor and a painter who lived in France. But there was no evidence that either had ever designed a building, and the designer’s touch was too deft; it appeared to be the work of an expert.

“Fortunately,” Johnson says, “there’s a wonderful and exhaustive monograph by a German scholar on Serlio, which has been translated into English, and it was filled with information and illustrated with all of his work.”

Born in 1475, Serlio was a seasoned architect who had designed the Cha?teau d’Ancy and other structures for private commissions. He published several notable books on architecture, including one that features a Roman triumphal arch echoed in the design of the mystery theater. Serlio also had a long-standing connection to the theater’s primary patron, Cardinal Ippolito d’Este, the Archbishop of Lyon.

D’Este was the son of Lucrezia Borgia and later made a famous contribution to Italian architectural history by building the Villa d’Este, with its storied gardens and fountains, at Tivoli, outside of Rome. He was also intimately involved with every detail of the planning for Henry and Catherine’s entry to Lyon, in which the temporary theater would figure prominently. Serlio’s ties to the d’Este family were extensive; he’d designed a palace for d’Este at Fontainebleau, the Grand Ferrare. In fact, when plans for the royal entry were announced, Serlio was living on the top floor of the palace.

“When I learned that not only had Serlio designed the house for Cardinal d’Este but also that he and his family were actually living there at the time,” Johnson says,

“I thought, well, that’s the clincher. “There was nobody else connected with it,” he adds. “He was the cardinal’s architect. Once I had the drawings to go on, I could relate those to the buildings he had built and the designs he had published, and there was a kind of visual continuity among them all. The dates were all right. There was no competition. It had to be Serlio.”

Johnson marshaled the evidence in a paper that he presented at the annual meeting of the Society of Architectural Historians last April. He also added the chapter about the temporary theater to Inventing the Opera House. His essay attributing the theater to Serlio, which is accompanied by McEniry’s drawings, appeared in the 2014 issue of the international art journal Artibus et Historiae.

“When the article was accepted, the only request for a change was that the drawings be redone because they were too good,” Johnson says. “I think they were afraid that people might think it was the real thing.”

The editors weren’t the only ones impressed by McEniry’s skill. After graduation, she worked as an intern at a Colorado architecture firm for a couple of years, helping with production and research for campus-facility planning documents. She then applied to eight top architecture schools and was accepted to all of them. She chose Harvard Graduate School of Design and started coursework this past fall. 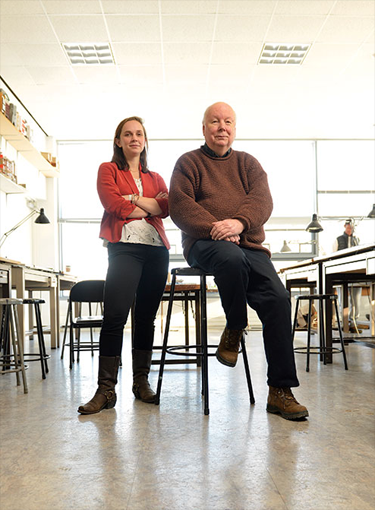 “I’ve been thinking about this project in relation to a theme we discussed a lot in school this past semester, which is how architectural history is codified or how architecture is remembered,” she says. “When E.J. and I proposed these drawings as a possible visualization of the Lyon theater, we added a chapter to its history.”

Johnson’s collaborations continue. Most recently, he co-authored an article with Ranana Dine ’16 presenting new information about Louis Kahn’s 1973 dismissal as architect of a new synagogue for Mikveh Israel, one of Philadelphia’s oldest Jewish congregations.

“The uniqueness about the collaboration with Grace was the way she took a verbal description and turned it into a convincing visual reconstruction,” he says. “I would never have been able to do that, and most students, I would guess, would not have been able to do it either. She’s remarkably competent and self-motivated. I was lucky.”

Abe Loomis is a freelance writer based in Western Massachusetts.
Print this page