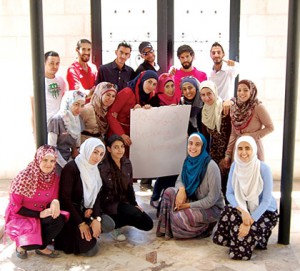 From July 2012 to 2013, its first year of operation, the Zaatari refugee camp drew more than 3,600 journalists seeking stories of Syrians who fled to Jordan after their lives were ravaged by war.

Sumaya Awad ’16 worked in the camp that first year, the summer before her sophomore year at Williams, and witnessed how refugees were traumatized by speaking with foreign reporters. “The process seemed disingenuous and insincere,” she recalls. “The refugees would tell their stories to the journalists and re-live the trauma. Then the journalists would go away, and nothing got any better. It really robbed the refugees of any agency.”

So, with a national Davis Projects for Peace grant, Awad returned to Jordan last summer to help refugees reclaim their stories through journalism. Working in Amman, she brought together 15 Syrian refugees, ages 18 to 28, who lived in camps and neighboring cities and were of varied socioeconomic backgrounds. They learned the basics of journalism from a professional reporter and a photographer and then worked to report, write, edit and produce a 20-page magazine called Ila Mata, which translates to Until When.

Written in traditional Arabic, the magazine is aimed at Syrian and Jordanian audiences. It covers a range of issues, including education, employment and health care, as well as personal stories about crossing the border and what it’s like to spend Ramadan in a camp.

Five hundred copies were distributed in July, and Ila Mata lives on, publishing one story each week on Facebook. A second printed edition is expected in the fall.

Awad, a history and religion double major with a concentration in global studies, is now at work on an independent study project, writing a historical novel about a Palestinian family exiled in 1948. Having also spent time in Hong Kong and Chile working with immigrants and refugees, she’s applied for a Watson Fellowship in hopes of studying the meaning of the hijab in France, Northwest China, Turkey, Egypt and Brazil. In all her work, she says, she’s trying to gain a deeper understanding of abstract concepts such as assimilation, borders, diaspora and home.

“I’m Palestinian, but I’ve never been to Palestine,” she says. “I grew up between Iowa and Jordan. My parents come from different regions of the Middle East. The idea of home has always been extremely ambiguous to me.”