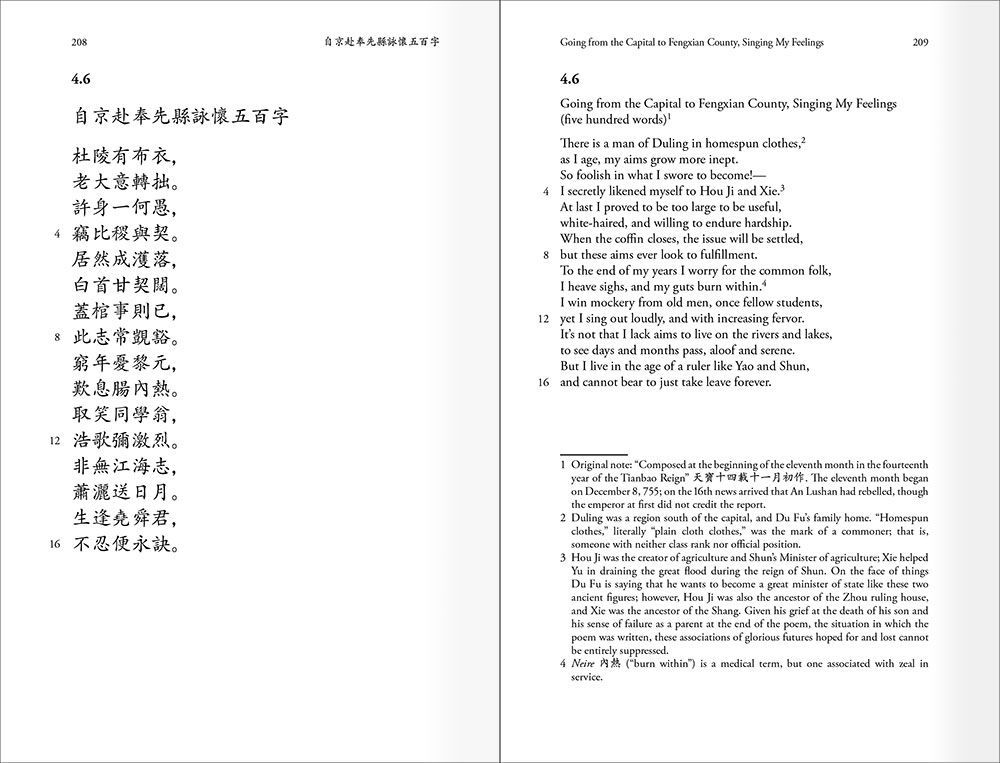 A facing-page translation of “Going from the Capital to Fengxian Country, Singing My Feelings”, courtesy De Gruyter. View full-size image.

Chinese professor Christopher Nugent is helping to publish a groundbreaking series of English translation volumes that will bring never-before-available Chinese texts to future generations of students.

Called the Library of Chinese Humanities and published in dozens of volumes over the next several decades by De Gruyter, the series will provide facing-page translations of important Classical Chinese texts from the beginning of the Common Era to the 13th century. It will also be accessible for free at the publisher’s website; the first volumes will be released this year.

Facing-page translations, in which Chinese texts are viewed line by line alongside their English translations, weren’t widely available before, creating a barrier for students who don’t have an advanced command of the classical language, Nugent says. Seeing the Chinese alongside the English gives “almost visceral contact with the mind of an important thinker from 2,500 years ago. It also forces [students] to think a lot more carefully about their own language.”

There’s opportunity for readers to access texts that continue to play crucial roles in literary, aesthetic and philosophical discourses in contemporary China and other cultures, as more people learn about Chinese literature, Nugent says. And interest in studying China and Classical Chinese is rising. At Williams, one of the highest enrollments of any advanced language courses is in Classical Chinese, where students read “the foundational texts of the tradition,” he says.

The first part of the Library of Chinese Humanities is a translation of the poems of Du Fu (712–770 CE), who wrote during the Tang Dynasty and is regarded as one of the greatest Chinese poets. Nugent, a member of the editorial board and a managing editor for the series, will also translate a set of texts of medieval Chinese writings on poetry and poetic technique for later volumes.

Nugent says he’s excited to contribute to his field in this way and to work with other sinologists, including his former graduate school adviser, Stephen Owen of Harvard University, who is also on the editorial board. “This is going to advance the field and give people like my students access to texts they wouldn’t have access to otherwise,” he says.

Find out more about the Library of Chinese Humanities at http://www.degruyter.com.