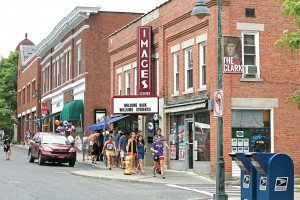 Anthropology professor David Edwards and journalist Christopher Marcisz have teamed up this semester to teach a course about different ways of understanding the relationship between Williams College and Williamstown.

Called Town and Gown: Investigating the Relationship of College and Community, the course starts out with a few short assignments. For one, students observe a local spot and write about what they see. Locations include the B&L Building, once the site of a gas station and now home to college offices and Tunnel City Coffee, and Town Hall, which used to be a college fraternity house. For another assignment, they research a historical conflict between the college and town, such as an early plan to build the ’62 Center for Theatre and Dance at the end of Spring Street, or the college’s decision to purchase the Greylock Hotel and replace it with the Greylock Quad residence halls.

“The town and the college have been woven together for centuries, and that makes for an incredibly rich research opportunity,” says Marcisz, who has worked as a reporter and editor at The Berkshire Eagle and is currently a visiting lecturer in anthropology.

Marcisz and Edwards want their students to gain the research skills, interview techniques and writing tools necessary to dig into such complex topics and tell the stories they find. The pair decided to co-teach the course because they believe anthropological studies and long-form journalism have much in common.

“We’re all dealing, in slightly different ways, with questions such as, ‘How do you do research?’ ‘What constitutes a good story?’ and ‘How do you frame your analysis?’” says Edwards, the James N. Lambert ‘39 Professor of Anthropology.

To prepare for their final projects, each of the 13 students—sophomores, juniors and seniors, some of them anthropology and sociology majors—will pitch several ideas about the intersection between the town and the college, just as they would to a magazine editor, and select the one with the most potential. They’ll spend the rest of the semester conducting research and interviews and then writing an anthropological study that reads like creative nonfiction.

“Students can access it from so many angles because it’s right here,” Marcisz says. “They’re living in it—which, of course, is part of what makes it such a rich issue.”