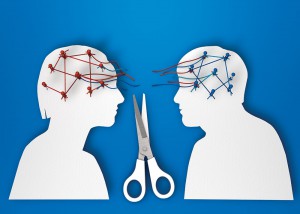 “It is more difficult than we think to distinguish between what we know and what the person with whom we’re talking knows, because we all see the world from our own perspective.” – Kenneth Savitsky, psychology professor

Imagine you run into your boss at the farmers market on a Saturday morning. She asks, “What are you up to?” and you assume she knows that you haven’t finished a report due Monday. You launch into an explanation about how you just left your desk for a minute to grab some groceries. She interrupts you and says with a smile, “I was just wondering what you’re up to this weekend. It’s beautiful weather we’re having, isn’t it?”

Misunderstandings like this are more common, it turns out, when we’re talking with people we know. “In order to communicate successfully with other people, you have to make a distinction between self and other,” says psychology professor Kenneth Savitsky. “It’s more difficult than we think to distinguish between what we know and what the person with whom we’re talking knows, because we all see the world from our own perspective.”

The question at the center of Savitsky’s past and current research is, “Can we set aside the self to truly understand someone else?” The answer seems to be yes, but we do it to varying degrees in different situations. “And we often don’t do it sufficiently,” Savitsky says.

That’s because there’s a two-step process in every interaction. The first step is automatic. Each time you engage with another person, you start with an assumption that the person knows what you know. The second step, in which you realize your assumption and recalibrate, isn’t automatic. It takes some work.

In 2011, Savitsky and colleagues from the University of Chicago and Massachusetts Institute of Technology published a study in the Journal of Experimental Social Psychology in which they showed that people engage more deeply with the second step when they’re interacting with strangers. “When interacting with a close friend or colleague, we’re less likely to recalibrate, because we feel more strongly that they do in fact know what we know,” he says. 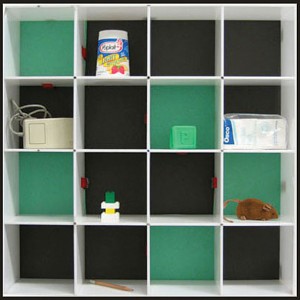 Step 1: You are sitting in front of this grid and can see all 16 slots clearly. Another person sitting across from you can only see 11 of the slots; five are blocked from her view.
Step 2: The other person says, “Move the mouse,” and you instinctively glance at the toy mouse on the right. But then you realize that she can’t see that mouse, and so she could not possibly be asking you to move it.
Step 3: If you know the other person well, you may even reach for the toy mouse. But if she is a stranger, you more quickly correct for that egocentric error and move the computer mouse instead.

Savitsky has recently launched a study with Williams assistant professor of psychology Jeremy Cone that builds on these concepts of miscommunication and recalibration. They’re asking how our assumptions affect complex negotiations, such as setting the terms of a new job.

Say you’re talking with a firm that wants you to start in June. You have summer plans and would prefer to start in September, but you agree to the earlier date. “You might feel entitled to a signing bonus because you made a concession about the job’s start date—even if you never mentioned your preference to the recruiter,” Savitsky says.Early findings in their study, in which Savitsky and Cone observe participants taking part in a mock negotiation like this one, suggest that, “once again there’s an egocentric error because we assume other people are more privy to what’s going on in our head than they actually are,” Savitsky says. “The tug of reciprocity is so strong that we expect it to happen even when the initial concession is private.”

As to whether we can overcome that initial egocentric impulse once it’s been pointed out: “I would love to think that’s true,” Savitsky says, “but I don’t yet have any evidence that it is.”

Savitsky joined the Williams faculty in 1997. He teaches Environmental Psychology, Experimentation and Statistics, and other courses in social psychology. He has written extensively about egocentrism in social judgment and self-appraisal.