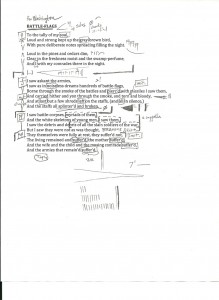 On Nov. 15, the Choral Arts Society of Washington performed a composition by assistant professor of music Zachary Wadsworth at the John F. Kennedy Center for the Performing Arts in Washington, D.C. In a review of the performance, the Washington Post called Wadsworth “someone to keep an eye on,” saying his composition, Battle-Flags, is “fresh, deeply felt and strikingly original.”

Battle-Flags is an introduction to Brahms’ meditation on mortality, Ein deutsches Requiem, and is based on a section of the Walt Whitman poem “When Lilacs Last in the Dooryard Bloom’d.”

A string orchestra and choir of 180 singers performed Battle-Flags. “This is a much bigger canvas than I’ve worked on before,” says Wadsworth, who has composed almost 100 pieces for smaller orchestras and choruses since 2001.

To compose Battle-Flags, Wadsworth began as he usually does. He turned off his phone and shut down his computer before sitting at a piano with a blank piece of manuscript paper, a pencil and the words of Whitman’s poem in front of him.

Once he had a few notes of the beginning set down, he wrote the end of the piece, also part of his process. “I decided to end this piece with echoes of the beginning of the Brahms Requiem,” he says. “It serves as a bridge between the new and the old.” 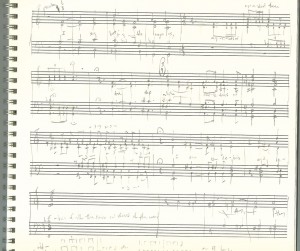 But then Wadsworth did something he typically resisted in the past. To simulate the complexity of a largechoir and orchestra, he input the score into computer software called Sibelius that formatted the music as though it were published and, using a database of notes, played it back for him.“I’ve always avoided using this software early in my process, because the temptation can be to write music that sounds good on the computer, but such compositions often don’t sound as good when performed by live musicians,” says Wadsworth, who is teaching Introduction to Music Theory and The Language of Film Music this fall. “In this case, I needed to ensure that the interlocking melodies sounded complex and chaotic enough. The technology really helped me.”—Julia MunemoLearn more about Zachary Wadsworth.
Print this page