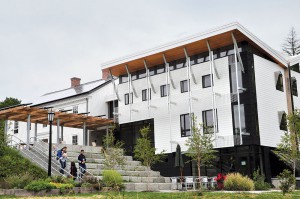 On Nov. 10, the Class of 1966 Environmental Center officially began its pursuit of Living Building Challenge status, the highest standard for environmental performance for a building. To meet the challenge, the center will need to operate for 12 consecutive months using only the power and water produced and collected onsite, among other rigorous measures. It’s no easy task, with heavy use expected for the center’s classrooms, kitchen, library and meeting spaces. But there’s much to be learned in the effort about how to reduce our impact on the planet.