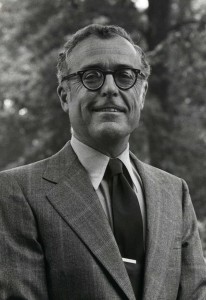 “Hank was a real Yankee gentleman: reserved but gracious, polite but playful, humble but widely effective. His almost 40-year tenure in our financial aid office…has helped make possible the education of countless students, here and elsewhere.” —President Adam Falk in a letter to the campus community about the death of Henry “Hank” Flynt ’44 on July 11 at the age of 93.

Flynt was Williams’ director of financial aid and associate dean of graduate fellowships from 1950 to 1988. He is considered one of the architects of the need-based financial aid system that now predominates at Williams and other similar colleges. He was an influential member of the Williamstown community, serving on the board of the Williamstown Theatre Festival and as a volunteer with the Congregational Church, historical museum and Pine Cobble School. With his father, Henry N. Flynt, Class of 1916, he helped make Historic Deerfield a leading center for the appreciation of New England history. He received a Williams Bicentennial Medal in 1999. Among his survivors are four children, including William A. Flynt ’75, and four grandchildren, including Molly C. Flynt ’09.