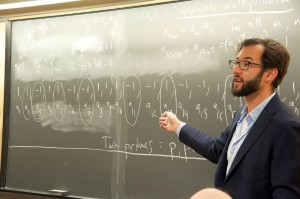 It’s a Tuesday afternoon in the fall, and a room in the Thompson Biology Lab is abuzz with activity. In between bites of sandwiches and sips of soup, some 50 science and math faculty follow along as Leo Goldmakher, assistant professor of mathematics, instructs them on paper folding.

Goldmakher draws an asterisk on the top left corner of several sheets of paper, placing one on each table. In an exercise that shows off a bit of what he calls “math magic,” he instructs each table to fold its paper in half in such a way that the asterisk is still visible. He then tells all but one of the tables to fold the papers in half again, with the asterisk showing. The participants continue to make folds, with one table instructed to stop each time. Pretty soon, most of the papers have been folded into thick strips.

When they’re done, the professors unfold the papers. It’s time to connect all this work to prime numbers. Goldmakher fills a chalkboard with numbers and symbols, explaining how the sequence of creases encodes the prime factorization of integers, a subject that’s been explored by mathematicians for millennia and is fundamental to modern cryptography. His fellow professors listen intently, asking questions and making observations. The hour flies by, and then the faculty science lunch comes to a close.

A Williams tradition that’s at least four decades old, faculty science lunches are held every Tuesday during the academic year. Each week, a different science or math professor gives a short research talk on anything from a question he or she is mulling over to the findings of a lengthy investigation. Professors from across the sciences, in biology, computer science, physics, psychology and statistics—to name just a few—enjoy the opportunity to share a meal together and engage in interdisciplinary exploration.

“Questions that have come up from colleagues outside the speaker’s discipline have spurred interesting discussions and, in some cases, have impacted the direction of research by raising new questions and suggesting new approaches,” says Tiku Majumder, professor of physics and director of the Science Center.

Often, informal conversation at the science lunches results in collaboration. A few years ago, a chat over lunch led to a biologist and physicist teaming up to model the mechanics of fast-plant motion. They’ve worked together ever since and co-authored several articles.

Joan Edwards, chair of the biology department, says the lunches have evolved since she first came to Williams in 1979. “There’s better food,” she says with a laugh. “But what’s also changed is the depth and the level of the research. And the participants—more women!”

For Edwards, there’s an abiding reason for attending: the friendships across the disciplines: “I can talk to a friend about the need to go to an opera together soon and learn that we have high-speed eye tracking equipment that I could possibly use in my research, all during one lunch.”

Photos by Office of Communications