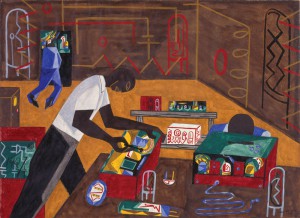 Bright in color and sharp in structure, many of Jacob Lawrence’s works also have a dark edge. Some of the subjects in his paintings depicting black life are jagged across the canvases, seemingly sliding off the page into uncertain futures. Other pieces show people working, calm, contemplative and grounded.

Radio Repairs (1946), part of Lawrence’s “Builders” series, tells the story of African-American workers securing education and training in hopes of better economic circumstances. An anonymous gift to the Williams College Museum of Art (WCMA), it’s been used in a variety of courses, including Lipp Family Director of Dance Sandra Burton’s Movement and Art Making.

The piece has also been part of several WCMA exhibitions, most recently “Three Centuries of American Art,” which closed in October. Says Elizabeth Gallerani, curator of Mellon Academic Programs, “Lawrence’s works have been folded into larger conversations about American art, whether in the 1946 setting or looking across time.”

Lawrence was the first African-American to be represented by a major commercial gallery (New York City’s Downtown Gallery). He studied at the Harlem Art Workshop during the Harlem Renaissance. His subjects include Frederick Douglass and Harriet Tubman. He’s best known for the series The Migration of the Negro (1941), which comprises captioned tempera paintings that depict the millions of black people who moved north after World War I. He continued to paint until a few weeks before his death in 2000.

“Although my themes may deal with the Negro, I would like to think of it as dealing with all people, the struggle of man to always better his condition and to move forward … in a social manner,” Lawrence told the Archives of American Art in 1968. “I like to think that I have grown and developed to where I can see it in this way.”