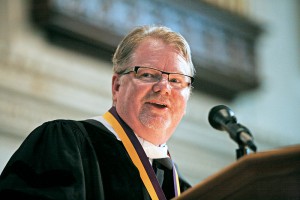 I arrived at Williams as a pre-med student. Then I took Math 107—or, more accurately, it took me. So sophomore year, as I was desperately searching for classes to direct me on a new career path, a friend recommended Professor Peter Frost’s class, Modern Japan.

My first experience with Professor Frost was during a visit to campus as a prospective student. I sat in on his Chinese art class, and he showed a slide of a charcoal drawing that illustrated the Chinese proverb, “Finding the truth with words is like trying to catch a salamander with a spoon.”

I thought that was a pretty cool concept; I ended up using it as one of my high school yearbook quotes. So I enrolled in Modern Japan.

One day Professor Frost said something about Buddhism and Christianity being so different that it would be very difficult for the two to be reconciled. I’d been raised Catholic and had done some reading on Buddhism, which led me to believe otherwise. So I figured I had my term paper all laid out; I was going to tell my professor I completely disagreed with what he said in class.

Then I came across the book Zen and Christian: The Journey Between in my research and realized the author was another Williams professor, John Eusden. So what I thought was going to be my groundbreaking paper had already been written as a book and published by a colleague and friend of the professor I was trying to impress.

I must have come up with some original material because I got a good grade on the paper. I then took a class with Professor Eusden and ultimately became a religion major with an Asian studies concentration.

Professors Frost and Eusden started me on the road to Japan, where I lived and worked for three years. This led to a career in the hospitality business, which led to owning and operating my own restaurant for five years. My professors encouraged me to find my truth—to catch my salamander. They and everything I experienced in and out of the classroom at Williams gave me the confidence to believe I could do that.

Still, I never for a second considered that I would ultimately catch my salamander in the basement of one of the largest homeless shelters in the country. At no time did I ever think that the office I would look forward to going to every morning would be an 8-by-10 converted cinder block mop closet in Washington, D.C. But even though the surroundings were and are humble, magic happens there.

DC Central Kitchen prepares, delivers and serves more than 11,000 meals every day. But we could produce 50,000, 60,000 or 100,000 meals today, and people will still be hungry tomorrow. The reality is that food alone will never end hunger. What we work hard to do every day is create opportunities for individuals to break the incredibly destructive and generational cycle of violence, addiction, incarceration, abuse, homelessness, hunger and, ultimately, poverty.

Using food as the means, not the end, our culinary job training program prepares men and women coming out of incarceration, addiction, homelessness and chronic unemployment for jobs in the hospitality sector that create a path to lives of self-sufficiency.

We are also trying to undo the “charity” mindset we have in our country—a well-intentioned pursuit that unfortunately seems to have lost its focus. A system that is often more about the redemption of the giver than the liberation of the receiver.

The Kitchen is a place where a teacher, a lawyer, a banker, a student, a recovering heroin addict who spent 20 years in prison and the president of the United States can work together to create change.

Part of that work involves breaking down barriers and smashing stereotypes that have held us back for so long. The Kitchen brings people around a common table, contextualizing and elevating a dialogue that gives a voice to the voiceless, includes those who have been marginalized and offers hope where there is mostly despair and resignation.

Ultimately, I believe this is what we are all tasked to do. But that doesn’t mean you need to work in the basement of a homeless shelter. Chances are, my dream job isn’t yours. But yours is out there, and I am sure that some of you sitting out there today have already figured out how you will make tomorrow better for others—how you will make our communities more equitable, more inclusive and more peaceful.

Last year, President Adam Falk told an alumni group in Washington, D.C., “At Williams, we want students who wake up every day and want to change the world.”

I don’t know that I ever said that to myself back when I was a student, but I do know that Williams gave me the confidence and the intellectual curiosity to keep searching until I got to a place where I would say that.

That is the truth I have found. That is the salamander I was finally able to catch. I hope all of you take this amazing gift that is Williams on your journey and don’t stop until you find your truth and catch your salamander.

Michael F. Curtin ’86 is the CEO of DC Central Kitchen. This essay is adapted from his Sept. 19 Convocation Address at Williams. He was one of five alumni that day to receive a Bicentennial Medal honoring ”distinguished achievement in any field of endeavor.” Watch Curtin’s entire speech at http://bit.ly/1iuQWAs.