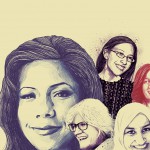 With regard to “Williams Women” (summer 2015), I was there for the first year of the 10 College Exchange Program, 1969-70, when roughly 40 female students from women’s colleges attended Williams. Years later, I met a young woman who graduated from Williams in the late 1990s. I mentioned I’d been with that first group. Her response: “When was that? 1945?” Ouch!

As one of the first seven women to graduate from Williams in 1971 (and proud mother of a 2006 alumna), I was surprised to see no specific acknowledgement of my class. We originally came as exchange students for a semester or year. We were highly visible on a men’s campus and not exactly self-effacing. One of us was valedictorian of our class. It wasn’t a completely smooth transition for the college or for us. Williams hadn’t intended to admit us as full-time students but, to its credit, when we advocated for the opportunity to apply for a formal transfer, Williams listened and corrected mid-course. Although some members of the student and alumni bodies weren’t thrilled with our enrollment, we, along with many of our male classmates and much of the faculty and administration, took great pride in Williams’ vanguard position. It’s a disservice to the Williams community past, present and future to lose this important part of the history of coeducation, bumps and all.

I was delighted to see Louise Ober included among those mentioned in “Early Women of Williams.” Louise completed seven full semesters with our class, was on the dean’s list, an honors English major, editor of The Red Balloon and active in Cap & Bells. She was an outstanding member of our class and an immensely gifted woman who died of cancer in 1978. We were proud to honor her at our 50th reunion by establishing a permanent award in her name for achievement in the performing arts. I am immensely grateful for what you have shared, and I know that Louise’s classmates are, as well.

While I applaud “Williams Women,” I refuse to accept the placement of a sexualized image of Madonna in the midst of their portraits as benign. Even if she was a client of Cheryl (Robinson) Joyner ’85, is this appropriate? We are so used to the over-sexualization of women in our culture that we don’t even see how absurd it is anymore. And this is dangerous. When we are honoring the strengths of women, their intelligence, their drive to succeed and their power to change and influence the world, let their accomplishments stand and be praised.