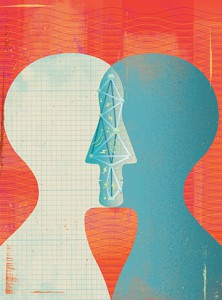 For physics majors at Williams, the core curriculum isn’t delivered in a lecture hall or around a seminar table. It’s far more intimate than that. Juniors and senior take three essential classes—classical mechanics, electricity and magnetism, and quantum mechanics—as tutorials.

A signature experience at Williams across all the academic disciplines, a typical tutorial brings together about five pairs of students each semester who, guided by a professor, takes turns developing independent work and critiquing it. But in the physics department, tutorials become the focus of the major and, effectively, a requirement for graduation.

Since tutorials are required of all physics majors, as many as 30 students enroll in one each semester. The entire class meets on Friday afternoons for a lecture on the coming week’s topic and to receive a problem set to work on for the tutorial session. A professor might meet with as many as 15 pairs of students each week.

“One great aspect of this is how the students talk to each other about the problems,” says Kevin Jones, department chair and William Edward McElfresh Professor of Physics. “You can see them each week, standing at the blackboard in the Physics Common Room, working together.”

Max LaBerge ’14, who graduated in June with honors in physics, says the tutorial format means each student’s investment in the class skyrockets.

“You can’t worm your way to the answer; you really have to own what’s going on,” he says. “I have a better understanding of physics than I would have with a more classical curriculum.”

An area of study such as the nature of light involves several different courses in the major, including the tutorials for quantum mechanics and for electricity and magnetism. While most things in the universe can be described as either wave or particle, light seems to be both.

“Particles describe most of the stuff around us,” says Frederick Strauch, assistant professor of physics.”Light particles can be thought of as extremely tiny tennis balls bouncing back and forth between atoms. Or light can be thought of as forming beautiful waves, much like the ripples on a quiet lake when it’s disturbed by a skipping stone.”

Understanding this so-called “wave-particle duality” requires sophisticated mathematical theories, including the wave theory explored in Strauch’s electricity and magnetism tutorial last fall and the particle aspect covered in the quantum mechanics tutorial, which Jone is teaching next spring.

In Strauch’s tutorial, the students used Maxwell’s equations—four equations developed in the 19th century that, when answered in sequence, govern how waves of electricity and magnetism travel through otherwise empty space in the physical world.

Using the equations, the students first modeled how light is produced by electric charges. They then plugged that information into the next equation in the series. When they answered that question, “requiring a good amount of calculus just to write down what we’re talking about,” Strauch says, they were another step closer to understanding light.

“The skills that are developed during tutorials aren’t just ‘How do I solve physics problems?’ and ‘How do I learn the fundamental laws of physics?'” Strauch says. “But also, ‘How do I think and communicate like a physicist?'”