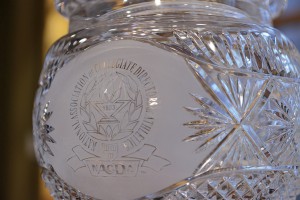 Williams won the Learfield Sports Director’s Cup in June—its 17th in the 19-year history of the cup. The award is presented each year by the National Association of Collegiate Directors of Athletics (NACDA) to the best all-around sports program for team performance. Colleges accrue points based on how their teams finish in NCAA championship events.

Williams edged out the University of Wisconsin-Whitewater by 90 points, one of the smallest margins of victory in the cup’s history. Ephs finished in the top five nationally in nine sports and in the top 10 in five others.

“The best thing about this award is that it give us a chance to celebrate our entire department,” says Williams Athletics Director Lisa Melendy. “I am proud of all of our teams and the work our coaches, athletes and support staff put in year in and year out.”

Melendy accepted the cup at the NACDA convention in Orlando, Fla., in June. A public presentation is planned in Williamstown during the Oct. 11 football game against Middlebury.

For more details, visit http://bit.ly/S8gGFi. And for the latest statistics and scores, visit ephsports.williams.edu.
Print this page