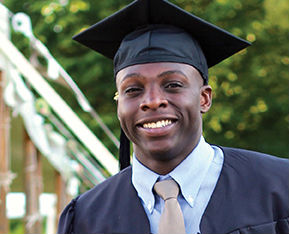 Mari Edwards ’14 has been writing and playing music since his high school days in Chicago, drawing on personal experiences and using music to explore who he is and who he will become. He released his first full-length album, Higher Edukation, on SoundCloud in April.

A psychology major with a concentration in Africana studies, Edwards was on the football and track and field teams at Williams. He and his college roommate Mary Clarke ’14 have been writing and producing music together since their freshman year.

Edwards is now working full time in the online and mobile banking department of M&T Bank in Buffalo, N.Y., as a trainee in the management and development program. He plans to tour and promote his album in his spare time, weaving performances together with forums in which he will talk to students about their own lives and futures. “I want my music to be more than something you just listen to,” he says. “I want you to experience it.”

You just living life ignorance is bliss
Stories never told voices never heard
You just keep it down (word)
You don’t lean on me, we just lean on lean
Meaning sipping that (syrup)
You tryna live behind the eyelids
System got you blinded
My eyes is still up on the prizes rising
They said the sky’s the limit lying
I’m aiming for the target, fuck that
I’m aiming way beyond it
Finding the findless, you’ll never find it
If you place that limit upon it

Chronic education
Take one, light one, let’s enlighten the nations
Put that love in a crack pipe act like you wanna get high on vacation

I used to think ’cause the way that I thought
That I prolly wouldn’t graduate
Even though I’m from the Chi (thank God I’m alive)
Shit I ain’t tryna be like ‘Ye
I stare in the mirror and I’m still self conscious
Tryna fight these monsters, demons, in my closet
Haunts me from back in the day even when I was semen