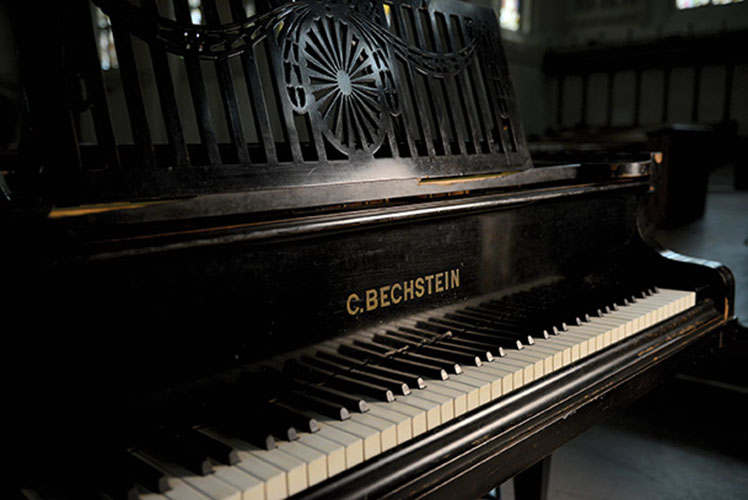 Listen to history and political science major Taylor Halperin ’14 play “Ev’ry Time We Say Goodbye” on Cole Porter’s Bechstein piano in Thompson Memorial Chapel on the eve of his graduation.

When Cole Porter died in 1964, he left his 40-acre summer estate, Buxton Hill, and its contents to Williams. His gift included a Bechstein grand piano (above), upon which he wrote most of the score of his best-known musical, Kiss Me, Kate. The piano currently has a home in Thompson Memorial Chapel.

Bechstein pianos have been made in Germany since 1853, first in Berlin and now in Saxony. They were the preferred instruments of many great masters, including Franz Liszt, Richard Wagner and Claude Debussy.

The pianos are known for their rich, clear sound, and Porter’s Bechstein is no different. “It hold pitch even in the humidity of the old building, and it has a nice, warm, tone,” says the Rev. Richard E. Spalding, chaplain to the College. “Though it’s not in the most superb shape, musically, it soldiers on.”

Originally stored in Weston Hall, the piano was moved to the chapel and has been used during weekly Catholic Mass, multi-faith services, Reunion Weekend functions and student events such as the Black Student Union’s “Taste and See” gospel service last winter. But it’s also been a spiritual resource for students seeking quite moments in the chapel. “Most hours of the day you can find someone sitting there to pray, to think or just to wonder, and some of those who stop in play the piano as part of their contemplations,” Spalding says.

“Though there’s nothing on the piano that identifies it as Porter’s,” he adds, “I think it would warm his heart to know that it’s been used not only as a musical instrument but also as a spiritual one.”