The Mathematics of Legos 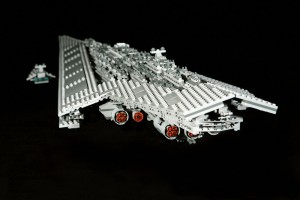 Associate Professor of Mathematics Steven Miller wants his students to see math in action, outside of textbooks and outside of the classroom. So he organized a Winter Study course with the ultimate aim of building a Lego Super Star Destroyer—a 50-inch vessel made up of 3,152 pieces that’s part of the “Star Wars” Imperial fleet—in 10 minutes or less.

Miller’s course, “The Mathematics of Legos,” delved deeply into applied mathematical concepts related to planning and organization. His 30 students, about half of them math majors, were tasked with writing a computer program determining how many different structures can be made with a given set of bricks. They also learned about efficient algorithms like Babylonian multiplication, which uses tables of multiples in order to make calculations quickly.

“I wanted to use Legos as a way to introduce students to some great mathematics,” Miller says. “It’s not enough to be able to solve a problem. We have to do it quickly in the real world.”

Quickly being the operative word. On Jan. 24, the students, aided by 20 volunteers and cheered on by more than 100 onlookers, gathered in the Paresky Center and divided into seven teams of sorters and builders led by “bag captains.” Using the concepts they studied and practiced, the students built the Super Star Destroyer in 10 minutes, 21 seconds, potentially a record-breaking speed. A video of the proceedings was sent to the Guinness World Records team for consideration.

The Winter Study class “is a chance to reach a different audience and teach students something they might not have thought of earlier,” says Miller, who runs a popular math riddle website (mathriddles.williams.edu) and works with the SMALL Undergraduate Research Project, a nine-week summer program at Williams that brings together undergraduates from around the globe to investigate open research problems in mathematics. “I want students to be exposed to some types of thinking that are not on their radar screens. Some things, in the real world, nobody would do the way they’re taught in books.” 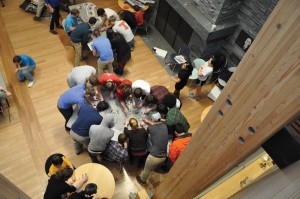 For Ricky Faillace ’16, who says he’s “by no stretch of the imagination a math person,” building the Star Destroyer brought to life concepts he’d only read about. “Something like recurrence relationships, like the Fibonacci numbers, were to me previously just a formula that will crank out numbers,” he says. “But using Legos, it becomes a matter of building on top of what you already have, where the sequence is vital to the structure. Otherwise the entire thing falls apart.”

Maximizing efficiency in fields such as business, finance and technology is an enormous priority, Miller says. Designing a cellphone app, for example, requires massive calculations that can be done in multiples, saving time and simplifying programming so that a powerful tool can fit inside a phone.