Researching Rocks (at the billion-pixel level) 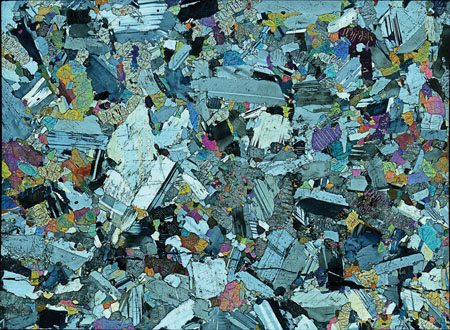 This slice of norite, from the Bushveld igneous complex in Bosspruit, South Africa, comes from the rock used to make the Science Quad’s J. Hodge Markgraf ’52 Memorial bench.

Gigapans are panoramic photos made up of billions of pixels. The technology, developed by scientists at Carnegie Mellon and NASA’s Ames Research Center for use in Mars Rover expeditions, involves a robotic camera mounted on a tripod. As the mount slowly swivels, hundreds or even thousands of individual images are captured. Software stitches the images into enormous files hosted on the Gigapan website.

A few years ago Paul Karabinos, the Charles L. MacMillan Professor of Natural Sciences at Williams, started using Gigapan technology with his students to photograph inaccessible cliff faces and make measurements on high-resolution images. He wondered what the technology might reveal if applied to slices of rock called “thin sections” that are cut thin enough for light to pass through. At 30 microns thick, 40 millimeters long and 25 millimeters wide, thin sections are used to identify minerals and study their textures to understand how rocks form.

Karabinos collaborated with Bronfman Science Center design engineer Michael Taylor to create an automated microscope stage that moves a thin section by precise increments to capture 225 to 400 individual high-magnification photos. The images are then pieced together using Gigapan software.

Since Karabinos began to share thin-section images, including lunar ones, on gigapan.com, he’s received requests from geoscientists around the world who want to emulate the process. He’s even been approached by an architectural firm about enlarging a thin-slice image to decorate building interiors.

Meanwhile, the technology he and Taylor have developed offers a new and valuable way to study rocks and share the excitement with students.