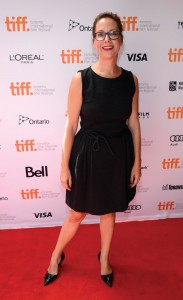 Professor of Art Liza Johnson ’92 has spent the last several years directing, writing and producing films while teaching courses in moving image production. Her latest work, Hateship Loveship, was picked up by IFC films after premiering at the Toronto International Film Festival in September. It will be released in the U.S. on April 11.

Based on Alice Munro’s short story “Hateship Friendship Courtship Loveship Marriage,” the movie focuses on the painfully shy Johanna (Kristen Wiig), who is hired by Mr. McCauley (Nick Nolte) to take care of his teenage granddaughter Sabitha (Hailee Steinfeld). Sabitha cruelly pens love notes to Johanna in the name of her estranged father (Guy Pearce), causing a change in Johanna. “For the first time she lights on fire with desire and has to have him,” Johnson told Vanity Fair last fall.

“Someone told me once that it’s smart to film adaptations of mediocre literature so that your movie is better than the source material,” Johnson said. “I obviously blew it on that advice, because Alice Munro’s short story is basically perfect! I love how Munro elevates the emotional lives of people in the Midwest without being sentimental, and I hope the film honors that spirit.”

Johnson’s first full-length film, 2011’s Return, chronicled the struggles of a female soldier (played by Linda Cardellini) after a tour of duty. In 2010, Johnson received a $25,000 Rappaport Prize from the deCordova Museum in Lincoln, Mass. Her work has been featured at the Museum of Modern Art, the Wexner Center for the Arts and the Cannes, New York, Berlin and Rotterdam film festivals. She is currently chairwoman of Williams’ American Studies program.