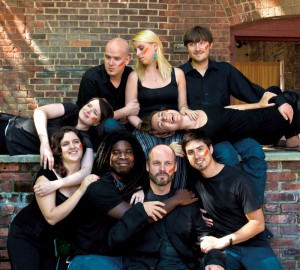 “New classical music is well and alive,” Brad Wells said as he and his vocal ensemble Roomful of Teeth accepted a Grammy in January for Best Chamber Music/Small Ensemble Performance.

Wells, the Lyell B. Clay Artist in Residence in Vocal Studies and director of choral activities at Williams, founded Roomful of Teeth in 2009. The project is dedicated to mining the expressive potential of the human voice. Its eight members strive to expand their vocabulary of singing techniques, studying non-classical genres such as Tuvan throat singing, yodeling and Korean Pansori. The project will be in residence at Williams in spring 2015.

The group accepted the award after performing at the 56th Grammy awards pre-telecast ceremony. They were also nominated in two other categories. Watch video of Wells at the ceremony and backstage.