Mei Kazama ’16 bends over a large piece of linoleum that’s warming on a 2-by-2-foot hot plate. Gripping a sharp cutting tool, she slowly carves a design into the softened tile, called a “lino plate.”

She straightens up every few minutes to check her progress, alternately sketching with a pencil and then carving over the sketches, trying to develop an artistic direction for the piece. The Spencer art studio where she’s working is abuzz with activity as 11 students explore printing techniques in professor Barbara Takenaga’s fall-semester course, “Low-Tech Printmaking.”

Unlike the “high-tech” printing classes Takenaga teaches—including lithography, intaglio and photo processes and involving chemicals, specialized tools and complex steps—low-tech printing focuses on ideas. “I can throw some of the technical details out the window and say, ‘Yes, you can rip your print up and put it back together,’” Takenaga says. “Or you can paint on it; you can make it a 3D sculpture.”

The class meets for three hours each Tuesday morning, and Takenaga’s students can be found in the large, industrial studio most other days—sometimes working into the wee hours of the morning.

Kazama, who plans to double major in studio art and biology, has lost track of the number of late nights she’s spent working on her lino plate. But when the class meets again, the abstract prints she’s made from it decorate the drying racks. “It’s most exciting when you first roll ink onto the lino and cover up all your pencil marks,” she says.

Nearby, Rachel Lee ’16 mixes inks, adding colors and modifiers to give them the right consistency or “tack.” She glances periodically at her finished lino plate, which is cut into the shape of a woman’s torso.

After testing a roller to make sure the ink adheres properly, she runs it over the plate, covering it in green. She eases the plate carefully onto the bed of the printing press, ink-side up. Moving to the sink, she retrieves some paper that’s been soaking (many artists prefer to print on damp paper because of how well it absorbs the ink). She places the paper between two dry blotter sheets, pressing a roller back and forth to absorb the excess water.

Working quickly, she places the printing paper on top of the plate and lays thick wool blankets, called felts, on top of it. Then she cranks the large wheel a half-dozen times, moving the entire work through the heavy press.

As the layers come out the other side, she peels back the felts and then the paper, revealing a fresh, crisply inked print, beautiful in its graphic detail. Later she’ll add to the print, using a technique similar to collage, in order to give the impression of the woman’s torso wearing a dress.

“It’s always a surprise what comes out of the press,” says Lee, who plans to major in studio art. “But you learn to work with it.” 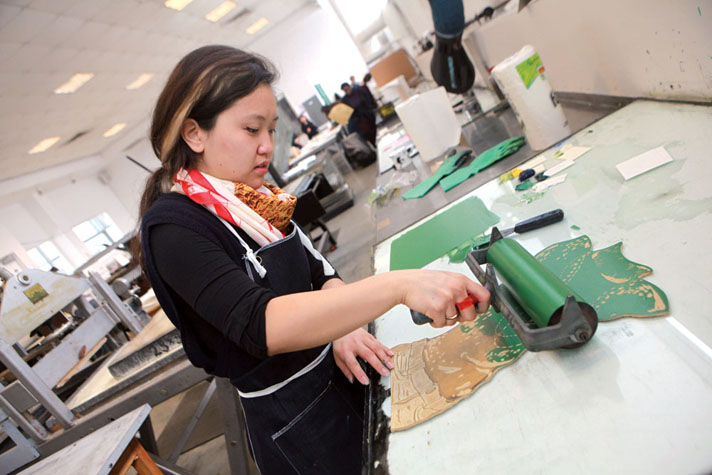