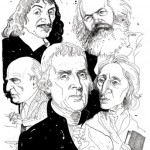 The excerpt from the new book by James MacGregor Burns ’39 in the fall 2013 magazine was instructive (“Fire and Light“). Burns tells us the Enlightenment rejected the old philosophy “furnished top to bottom by God,” replacing it with the “new unflinching standards of empiricism.” But rudderless empiricism also has its problems. Despite its achievements, the Enlightenment has left a gaping moral and spiritual hole in Western civilization, witnessed by Europe’s centuries of destructive wars lived out among the most enlightened societies on earth. Unfortunately, scientism, the belief that science is the only kind of knowledge, has left the West—in the words of P.T. Forsyth, a “cut flower civilization”—beautiful, but cut off from its life force. The truth is that Judeo-Christian influence, despite its historic problems with religious freedom and scientific inquiry, firs sparked scientific engagement and provided the necessary moral compass. Free from clericalism and institutional control, it is also the likeliest place for the West’s rebirth to being.