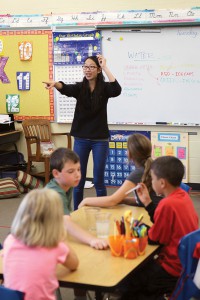 The students in Susan Langman’s third-grade class at Williamstown Elementary School are trying without success to remove food coloring from water with small, plastic pipettes. But their many exclamations over the impossibility of the task—which simulates removing pollution from the ocean—are cut short when Intekhab Hossain ’17 holds up a crystal-clear glass of water and announces: “I have a pollution-free ocean right here.”

The chorus of “How did you do that?” is quieted when one pupil asks, timidly, “You didn’t put any pollution in there in the first place, did you?” Hossain thanks the child for summing up the point of the day’s lesson—the second in a semester-long inquiry into weather and climate change. In the coming week, Hossain and his co-teacher, Cindy Le ’15, will explain humidity and precipitation using sponges.

Williams students have been teaching and supporting science instruction in area elementary schools for two decades. But the scope of their work will expand dramatically, thanks to a new collaborative venture with the Massachusetts College of Liberal Arts (MCLA) and North Adams Public Schools.

Funded by a four-year, $810,876 grant from the National Science Foundation, the project brings together students from Williams and MCLA with college science professors and teachers in North Adams. They’ll be working to develop instructional units based on the Next Generation Science Standards currently being adopted by the Commonwealth of Massachusetts. Williams and MCLA students will teach the new curriculum in K-7 classrooms.

The undergraduates and local teachers will also participate in joint professional development to deepen their understanding of the nature of scientific inquiry and science teaching. “We are filling another niche as we connect college students with the elementary schools and allow them to learn science through teaching it,” says MCLA professor Nicholas Stroud, lead investigator of the effort.

Over the summer, Williams and MCLA students began developing hands-on lessons and toolkits like the one Hossain and Le used in Langman’s class. Le, who also taught science to elementary schoolers last year, says she drew from that experience as she worked to update a lesson on the water cycle based on the new standards. “Last year, the lesson involved building a terrarium, but my partner and I couldn’t get the water to evaporate when we tested it,” says the Asian studies and economics major. “So we heated up water in a beaker and showed the students how it condensed on an aluminum lid.”

Le incorporated the beaker experiment into this year’s new lesson plan on the water cycle. “I knew it worked better,” she says.

The weekly lessons are reinforced with reading and language arts activities that correlate with the new science standards, says Jennifer Swoap, director of elementary outreach for the Williams Center for Learning in Action (CLiA), a partner in the project. “Science’s wonderful vocabulary, rich nonfiction reading and clear frameworks for experimentation set the stage for creative thought,” she says. “When kids are asking why and how, we know they are engaged and thinking.”

Says Hossain, who taught English at an orphanage and physics at his old high school in Bangladesh during a gap year before Williams: “I love spending time pondering complicated concepts until I understand them well enough to explain them to anyone.”