A Recipe (Book) for History

Chesnut, the wife of a wealthy South Carolina planter and former U.S. senator, was an eyewitness to major developments in the Civil War. Her widely published, detailed narrative of life during wartime in the Confederacy has been the subject of intense study, including in the Pulitzer Prize-winning Mary Chesnut’s Civil War, by C. Vann Woodward, and the PBS documentary series The Civil War, by Ken Burns.

Morrison first learned about Chesnut in the course “History of the Old South,” taught by Williams history professor Charles Dew ’58. Then, during a Thanksgiving dinner with close family friends—the Collinses, who are descendants of Chesnut’s sister—Morrison heard about the manuscript, which had never been shared publicly. He asked to see it. 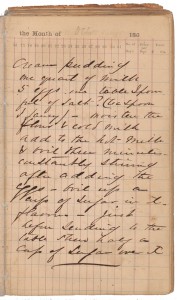 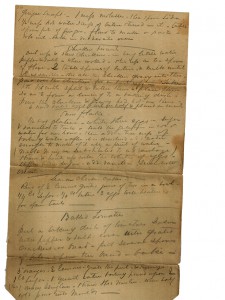 The book was in Wyoming, where another Chesnut relative lived. The family had it delivered to Morrison’s Chapel Hill, N.C., home during his spring break.

Morrison discovered a treasure trove of material, including approximately 500 recipes clipped from newspapers and 70 written by hand, as well as medicinal remedies, guidance on caring for animals and details about the running of Chesnut’s household.

With the help of Dew and Professor of Russian Darra Goldstein—and with funding from a Russell H. Bostert Memorial Fellowship research grant that gives preference to Williams history majors—Morrison spent last summer poring over the book, visiting archives and meeting with Southern historians and food writers.

The history and Arabic studies major plans to do his senior thesis on the book. He’ll analyze recipes and gather details about cooking techniques, how much help Chesnut had in the kitchen, the availability of different foods and what tools were used to put meals together.

Goldstein, a noted culinary expert and the founder of Gastronómica: The Journal of Food and Culture, says many of her peers are excited to see what information Morrison gleans from the cookbook. “Once you start reading the recipes as an entrance to (Chesnut’s) life and times,” she says, “you can excavate all sorts of information about America’s most distinctive regional cuisine, including its roots in African foodways.”