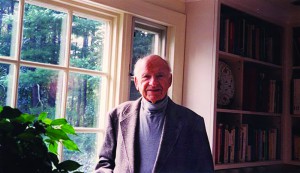 On Oct. 18 the Williams community gathered in Thompson Memorial Chapel to pay tribute to James MacGregor Burns ’39, the college’s Woodrow Wilson Professor of Government, who died on July 15 at the age of 95.

Burns was a renowned presidential historian and leadership scholar. He began his career as a congressional aide in Washington, D.C., and served in the U.S. Army during WWII as a combat historian. He earned his Ph.D. from Harvard (1947) and completed postdoctoral work at the London School of Economics before publishing his first book, Congress on Trial: The Legislative Process and the Administrative State, in 1949. He cowrote Government by the People, which for many years was the most widely used college textbook on American politics. His 1978 book Leadership is credited with launching the cross-disciplinary field of leadership studies at Williams and at many other colleges, business schools, and universities, including the University of Maryland’s James MacGregor Burns Academy of Leadership.

Burns wrote nearly 20 books, including biographies of John and Edward Kennedy and the seminal two-volume F.D.R. biography, Roosevelt: The Lion and The Fox (1956) and Roosevelt: The Soldier of Freedom (1970), which won the Pulitzer Prize and the National Book Award. He served on the Williams faculty from 1947 until his retirement in 1986. With his coauthor and longtime companion Susan Dunn, the college’s Preston S. Parish ’41 Third Century Professor in the Arts and Humanities, Burns continued to teach Winter Study courses on the Roosevelts that included research trips to the FDR Library in Hyde Park, N.Y.

He lectured widely in the U.S. and abroad, appeared frequently in the media and served as president of the American Political Science Association and the International Society of Political Psychology. He was politically prescient, warning against the decline of parties, the rising importance of political money, and the deleterious effects of midterm elections. His 1963 book The Deadlock of Democracy was closely studied by Presidents Kennedy and Johnson and foreshadowed the deadlock in Washington that exists today.

His last book, Fire and Light: How the Enlightenment Transformed Our World, was published in 2013. Williams awarded Burns the Bicentennial Medal in 1993 and a Doctor of Humane Letters in 2003. His survivors include Dunn, three children, and four grandchildren, including Teresa S. McHugh ’11.