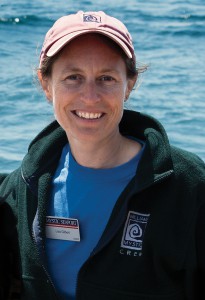 This past May, the Charles W. Morgan—the last remaining wooden whaling ship in the world—set sail for the first time in nearly a century. Its 38th voyage was unlike any that came before it.

The ship once roamed every corner of the ocean in pursuit of whales. But it spent last summer sailing the New England coast, hosting artists, scholars and scientists—85 in all. Selected by Mystic Seaport, with funding from the National Endowment for the Humanities, these “38th Voyagers” were engaged in a public history project to raise awareness of America’s maritime heritage and to call attention to issues of ocean sustainability and conservation.

I led shipboard science, gathering information on the weather, water, birds, mammals and even trash we encountered along the way. Though we used modern instruments like GPS to determine our location and a microscope to analyze plankton, we recorded our observations in a log much like the ones used by generations of seafarers before us.

We collected plankton with a net and looked at it under a small microscope on board. We plunged thermometers into the water we collected with a bucket. Traditional observations like these were and are important for both safe navigation and finding whales at sea; our log will join the Morgan’s others as a new piece of history in Mystic Seaport’s collection.

I also coordinated a group of nine 38th Voyagers who took part in a day sail out of Provincetown, Mass., to the Stellwagen Bank National Marine Sanctuary on July 11.

At the sanctuary we witnessed minke and humpback whales—the first whales to be seen from the Morgan’s decks in nearly a century. It was a whale watch like no other.

The day was filled with lively discussions. Beth Schultz, a poet and Melville scholar, spoke passionately about whale poop with biologist Joe Roman. Schultz’s project was inspired by the smells she remembered from a 1975 whale watch, and Roman has spent years documenting the importance to the ecosystem of whale “fertilization” at the ocean’s surface.

Midway through the afternoon, I helped another 38th Voyager map ocean currents by deploying GPS-enabled drifters, a modern version of a message in a bottle, while another voyager worked on melodies inspired by the sounds of the rig. We were all collecting data: the scientist with a bucket, the artist with watercolors, the journalist with a notebook.

Since then, my group has produced a great deal of work based on its experience. Schultz has finished 19 new poems in the voice of Melville’s Ishmael. String musician and NOAA biologist Gary Wikfors has composed 16 original melodies. Artist and animator Evan Turk has created dozens of pen-and-ink and watercolor illustrations. Middle school teacher Taylor Sahl is producing a video. Award-winning photographer Barbara Bosworth has made large-format prints. And University of Connecticut oceanographer Mike Whitney has tracked the surface drifters we released, which have now traveled hundreds of miles.

Yet the voyage is hardly over for any of us; we all continue to process our “data.” Our journey on the Morgan was designed to represent many perspectives, an interdisciplinary approach very similar to that of Williams-Mystic. This is no accident. Susan Funk, the executive vice president of Mystic Seaport, is one of several Williams-Mystic alumni heavily involved in the 38th Voyage. Mystic Seaport asked voyagers to examine every aspect of the journey—to consider the perspectives of those who sailed this ship in the past and to think deeply about how whales, the environment and society are connected today.

What have I learned so far from the voyage? From a scientific perspective, you may be disappointed to hear that we didn’t discover a new whale species, detect a toxic algae bloom or trace an unknown oil spill. What we were able to do was document some physical, chemical and biological properties of a portion of the North Atlantic at a moment when every baseline measurement is crucial for comparison as we watch the ocean change and consider our roles in these changes.

More broadly, the 38th Voyage reminds us of the value of many voices. The voyagers have recorded their thoughts and their findings for future generations studying America’s relationship with the sea. They’ve shared their passion with each other and posed a great challenge to us all: to learn from our past and try to see a sustainable future for whales and for ourselves from as many perspectives as possible—which, as it happens, is exactly what we try to do each semester with our Williams-Mystic students.

Lisa Gilbert is an associate professor of geosciences and marine science. She has been teaching at the Maritime Studies Program of Williams College and Mystic Seaport since 2002. As part of the Williams-Mystic program, she regularly sails as chief scientist in the Atlantic and Pacific oceans and leads interdisciplinary field seminars to changing coastlines in the U.S., including those of Louisiana, California, the Pacific Northwest and Hawaii.