On Being 18 in America 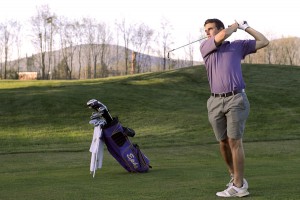 Two months before enrolling in Williams College, where he’d been accepted early decision, Williamstown native Dylan Dethier ’14 found himself feeling like he hadn’t really done anything with his life. So he deferred admission, loaded up his Subaru with golf clubs, collared shirts and granola bars, and set out to drive solo across the country. His goal: to play a round of golf in all 48 contiguous states. Dethier first learned to play golf on a shoes-optional par-30 course near his grandparents’ house on the coast of Maine. He came to love the game “more than just about anything,” he says. But as he spent the next 10 months driving 35,000 miles and playing on some of the country’s most celebrated greens as well as on $10 municipal courses, he realized something. Though “golf is famous for dividing people by skin color, by age, by wallet size,” he says, “there’s a surprising equality to the game.” His experiences became the seeds for 18 in America: A Young Golfer’s Epic Journey to Find the Essence of the Game. Playing alongside war veterans, autoworkers and pros alike, he learned more about the universality of golf, how he was changed by each round and how he more than succeeded at capturing “a cross-section of America using golf as a lens.” Watch a video Dethier talking about how he came to write the book at https://www.youtube.com/watch?v=B_fkMPOGzHs.

I walked with Randy toward our balls until he broke the silence. “Haven’t seen you around here.” I couldn’t tell if he was curious or just didn’t like the awkward quiet. “No, I’m not even from Michigan, actually,” I told him. “I’m from Massachusetts, just traveling through the area.” He raised an eyebrow. “Traveling through?” Again the skepticism—suspicion, even—same tone as the fireman. I was guessing people didn’t “travel through” Flint very often. “Well, sort of. I’m trying to go to every state this year, playing golf and talking to people. I finished high school this spring and—” “Well, congratulations.” “What?” “Congratulations. Graduation, that’s a fine accomplishment.” “Oh—thanks.” I was taken aback. In Williamstown, graduating high school was just something you did. I didn’t expect to be really, genuinely congratulated for it any more than I did for brushing my teeth. But then this really wasn’t Williamstown. “So you’re going everywhere?” he continued. “For how long?” “Until next June. That’s the plan, at least.” He gave a low whistle. “Damn. Now that’s pretty cool.”   —from 18 in America (Scribner, 2013), by Dylan Dethier ’14