Mystery of the Mummified Hand

“The hand is no longer lost on the time line of history. It can be reclassified as a living reminder of an ancient civilization.”
– Elizabeth Hart ’14, anthropology and biology major 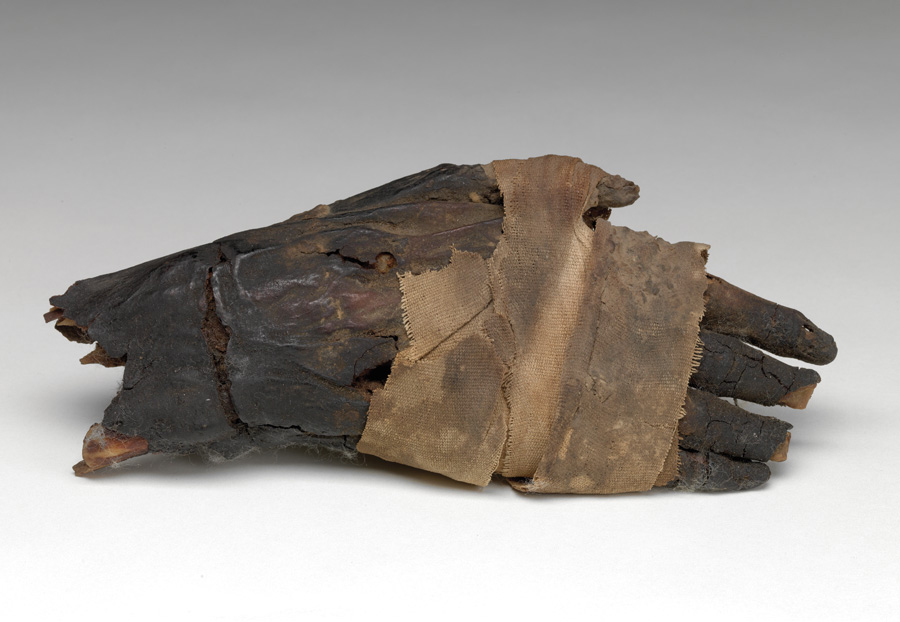 Each semester, Antonia Foias’ anthropology students visit the Rose Study Gallery at the Williams College Museum of Art to view ancient artifacts. And, each semester, her students have the same reaction to one object in particular—a mummified hand.

“They are horrified,” Foias says. “Shocked.”

There are no records of how the hand came into the museum’s collection, and for years there was no background or date to place it in any specific time period.

Last fall Foias and Elizabeth Hart ’14, an anthropology and biology major doing an independent study project on Egyptian religion, proposed DNA and radiocarbon testing of the mummy hand, presumed to be of Egyptian origin. The first step was having it X-rayed at the Williamstown Art Conservation Center to see if it would be possible to remove a piece of bone for testing.

“I placed my hand over the X-ray photograph,” says Foias, who found that the mummy hand was larger than her own. She recalls asking, “Was it a man? A tall woman?” 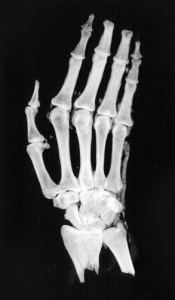 A colleague at Texas A&M University determined that the hand definitely belonged to an adult—and that it was in fact possible to remove a sample of bone from the wrist to send out for analysis.

Testing done at the Paleo-DNA Laboratory at Lakehead University in Thunder Bay, Ontario, confirmed the hand’s Egyptian origins. Its DNA profile was from haplotype L3, one of the oldest mitochondrial branches that diverged directly from the line of the mitochondrial Eve, the most recent common matrilineal ancestor of all currently living, anatomically modern humans.

Subsequent testing at Beta Analytic, one of the world’s largest radiocarbon dating labs, placed the hand between 70 and 230 C.E., the Roman period in Egypt. “During this time, mummification was on the decline,” says Hart, “which leads me to believe that this individual lived in a small settlement that hadn’t undergone extensive Romanization.”

“The hand,” Hart adds, “is no longer lost on the time line of history. It can be reclassified as a living reminder of an ancient civilization.”

But the answers Foias and Hart discovered raise even more questions. “The end of the story,” Foias says, “is when we find out who he or she was and we can reunite the hand with the rest of the body.”