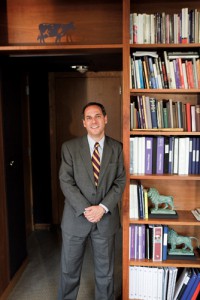 More important than finding answers is asking the right questions. That’s true not only in the individual disciplines we teach but in how we think about the college as a whole.

We’ve recently been working at imagining the future of Williams through the lens of its past. That might seem an odd approach, but I’ve found it highly meaningful. We’ve been prompted in part by the fact that the college is passing the 50-year anniversaries of many key moments in the development of the Williams that we know today. Most of these occurred during the presidency of John Sawyer ’39.

The late Fred Rudolph ’42, a leading historian of higher education and Williams professor of history, emeritus, described the college of that time, despite its virtues, as having become sleepy until it arose in the Sawyer era. Historical developments, in hindsight, often seem to have been inevitable, but on closer examination they clearly resulted from decisions and actions taken by individuals and communities based on their values and on changing circumstances.

In Williams’ case, this was made clear at the panel discussion that was part of this spring’s Daring Change weekend, in which people who’d lived through the Sawyer era and its immediate aftermath told how the changes back then came about and what effects they’ve had on Williams and on higher education more broadly. You can watch that illuminating discussion online at Daring Change.

In a nutshell, the changes that seemed daring at the time, and that have served Williams so well since, came about through inclusive planning processes that applied the college’s core values, particularly its commitment to the liberal arts, in the context of rapidly changing social developments, most notably the Civil Rights movement, expanding opportunities for women and the increasing movement around the globe of people and ideas.

It was through this historical lens that I experienced over the rest of that weekend 12 TED-like talks given by a wide-ranging group of faculty, staff, students and alumni. We asked them to think, in turns playfully and provocatively, about some aspect of the future and its possible intersection with Williams.

The speakers poured themselves into these presentations, for which I’m so grateful. They make for compelling viewing and reading. (Excerpts are featured in the Daring Change article)

Taken together they affirm the college’s core values (that we should not train students for a job but educate them to be creative, committed and interdisciplinary problem solvers), and they highlight the evolving circumstances with which Williams must engage (including demographic trends, the expansion of technology, climate change and the growing role of internationalism).

To shape the discussion, we’d asked our speakers to respond to one of four questions:

These were the questions faced by the Williams of the 1960s, and they’re the questions we face at Williams today. They’re the basic questions of any educational community. They’ve provided a useful framework not only for the conversations of that day but also for discussions I’ve had since in a variety of settings.