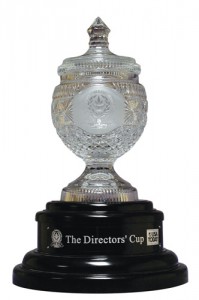 For the 16th time in 18 years, Williams has taken home the Learfield Sports Directors’ Cup, awarded annually by the National Association of Collegiate Directors of Athletics to the best all-around athletics program for team performance in 18 sports.

“This award celebrates the culmination of a year’s worth of work by our coaches and our athletes, their dedication and pursuit of excellence,” said Williams Athletic Director Lisa Melendy, who accepted the cup at the NACDA Convention in Orlando, Fla., on June 14. “I am proud of the work of our student-athletes and my colleagues.”

The Ephs claimed victory with nine of their 18 teams placing in the top five in the nation and 12 placing in the top 10. Women’s crew and men’s and women’s tennis all earned first-place finishes in Div. III, crew for the eighth straight year—the longest streak in NCAA rowing—and women’s tennis for the sixth straight year, a record shared with only one other NCAA school, Stanford. Men’s soccer and women’s basketball placed third overall.

The Ephs earned points in all 18 sports (nine men’s and nine women’s) over three seasons, amassing 1,273.75 points—the second-highest total in the history of the cup. (Three years ago the Ephs set the NCAA Div. III Directors’ Cup points record by scoring 1,292.) Emory took second place this year with 986.50 points. And last year’s winner, Middlebury, came in third this year with 941.75 points.

And for the latest varsity scores, statistics and stories, visit athletics.williams.edu.